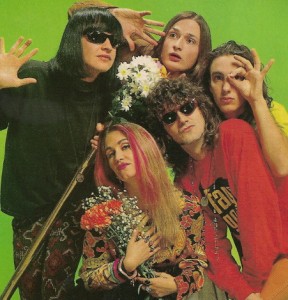 HoZac’s Blackout Fest returns for another year of unrefined rock ‘n’ roll. And each evening’s headliner represents a different portion of underground weirdness: The weekend’s festivities run the gamut from psychedelia to South Bay hardcore and garage. Davila 666 sound like every other garage band you’ve heard—there are just more dudes in the group than most would find necessary, and the whole thing’s dispensed in Spanish. Roky Erickson tops off the weekend Sunday, and while his efforts with the 13th Floor Elevators remain entrancing, his return to regular performing a few years back leaves a bit to be desired. So, that leaves Saturday night’s line-up to make the whole endeavor worth a damn. Cleveland’s Homostupids are as dumb as they sound—at least the music benefits from a sophomoric take on life. But the weekend’s could-be show-stopper comes in the form of Los Angeles’ Redd Kross. Founded in the late seventies by the McDonald brothers, the band’s counted members of Black Flag and the Circle Jerks in its ranks. The ensemble, which is set to perform its earliest and most punky material, are going to work up songs about girls being violated by crosses, at least one song related to Charles Manson and a bit about Lita Ford. It sounds almost as good as watching the nightly news from 1969 through 1983. Of course, the band issued work after “Born Innocent,” its debut long-player. On the ensemble’s next full length of original material, the 1987 “Neurotica,” the history of California pop music gets sewn up pretty succinctly. “Love is You” could have hit the charts during the late sixties, while a few other selections seem prescient given what would happen in underground music in the following five years. Watching some middle-aged folks play music they wrote around the onset of puberty’s gotta be weird, but it should provide a few gripping moments of culture shock. (Dave Cantor)