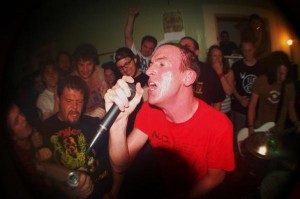 North Carolina has a pretty heady history within hardcore’s trajectory. With Corrosion of Conformity developing an international following, the state can be figured as an important locale for the merger of aggressive musics. Double Negative won’t ever hit the big time, but some of its members have worked with CoC dudes in the past. And hearing anything from the group’s all-too-scant discography explains why. Comprising veterans of the hardcore scene reaching back to the eighties, DN is the proper East Coast foil to Keith Morris’ OFF! While the former Circle Jerk and his crew hit festivals and rack up media accolades, DN is more likely to be found in a basement, rattling around with the barely legal set, throwing down hardcore with a surprising range. “Mein Trappe,” which was initially issued on a set of demos from 2006 and eventually “The Wonderful And Frightening World of…” a year later, opens with a bit that sounds like Stiff Little Fingers’ “Alternative Ulster” before sprinting to its conclusion in American fashion. Of course, the entirety of the group’s output doesn’t cop rough trade from the wrong side of the Atlantic. DN’s pair of “Hardcore Confusion” singles take on some noisenik tendencies reminiscent of out-acts like Brainbombs. “Writhe” features a rather traditional song structure for about a minute and a half before the band starts churning out some circular riff void of melody, relying only on rhythmic tenacity to get over. “Face Jam” isn’t quite as radical, but maybe more vicious. Keeping itself low-key and performing at DIY venues, DN isn’t bound for glory. But the tactic inevitably provides for memorable live sets. Chicago locals Broken Prayer, Sea of Shit and Cold Lovers open. (Dave Cantor)