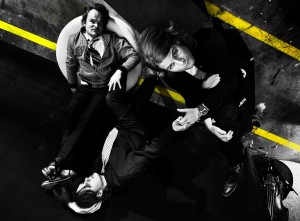 The piano trio is a well-worn jazz tradition. Smaller, nimble ensembles have the ability to churn out tough blues one moment and lilting standards the next, or to shoot off some noisy improv if the feeling grabs them. Taking those forms and personalizing a music that’s been around for about a century takes keen vision. Norway’s In The Country—pianist Morten Qvenild, drummer Pål Hausken and bassist Roger Arntzen—seeks to express a view of the genre through the kaleidoscope of rural Europe and an international understanding of the music.

“We’ve been educated in American jazz from school. But since the start, we’ve chosen not to be part of that tradition,” Qvenild says. “For an American, it’s natural to play that kind of music. But for us, it didn’t feel natural. We had to make our own music… We have another starting point.”

In the States, Norway’s pop culture seems limited to occasional mentions of Varg Vikernes’ post-incarceration recordings or a sensational reference to the influence of black metal on a spate of minimalists. But there’s more to the country’s music history.

“It’s a tradition… not related to tradition at all. That’s what’s special about Norway,” Qvenild riddles. “In Sweden and Denmark, [jazz is] much more influenced by be-bop.”

Wriggling free of blues constraints, In The Country renders a jazz music engaged with languid melodies more than bop’s syncopated grit. “Doves Dance,” from the group’s 2009 “Whiteout,” is all simple brush strokes flitting against a snare drum and Qvenild’s minor-key ruminations. There’s a blue tinge to the composition, but that should be attributed to the pianist’s preference for sedate surroundings as opposed to an appreciation for Brother Jack McDuff.

“Today, we were rehearsing in Oslo—the other guys in the band live there,” Qvenild says. “But I live in the countryside, a half hour outside of town. I have to take a boat to get into town… It’s very rural, it’s a lot of horses and sheep.”

Qvenild’s home life isn’t instantly apparent, given the band’s use of autochthonous folk instruments, but in its moniker and through the names he gives compositions—there’s the aforementioned “Doves Dance,” “The Bear” and “Beaver Creek”—it becomes clear.

“I like to do skiing and fishing and stuff like that. I think that affects my music,” he says. “I make more space in the music to fulfill the idea of something moving slower than the everyday burden of life. That’s the contrast we were talking about when we named the band. Ten years ago, everyone was talking about jazz being an urban phenomenon. We didn’t relate to that… we don’t think our music is an expression of urban society at all.”

“Torch Fishing,” another song revealing something of a bucolic ideal, was first recorded in 2006 and released on In The Country’s second studio album “Losing Stones, Collecting Bones.” Marc Ribot contributes guitar to the track, taking lead, but listening to the rest of the group enough to make the entire thing an organic entity–a work pulling from Ribot’s avant-America and Qvenild’s rural melodicism. After hearing In The Country render the song live as a trio on its 2011 “Sounds and Sights,” the crescendo on the studio version appears to be an adjunct to Ribot’s presence, something the trio may not have meted out on its own.

“We hooked up with (Ribot) when we were doing concerts in New York–2005 I think,” Qvenild estimates. “We played a concert together, and he played on the album. The song’s still with us… (and) constantly evolving. We’ve been doing the band for over ten years, so we wanted to show the difference between the studio and live.”

Live settings during this North American tour are going to be smaller clubs, not the festivals In The Country performed at while in the States and in Canada on its last tour. New York and Kansas City, sites of jazz incubation, aren’t on the schedule, but New Orleans is. Working to craft a unique, Norwegian voice for his trio, Qvenild can’t mitigate the awe with which he listens to early jazz players from that southern port city.

“I’m really looking forward to playing there. It’s the first time we’re going,” he says. “I feel really connected to [early jazz]. It feels like American folk music when I listen to it. It’s impossible for us to play like that—that kind of music, in some ways, we’ve used it as inspiration to make our own music… It’s good to be inspired by things you can’t do… I have to make my own version of the music I hear.”