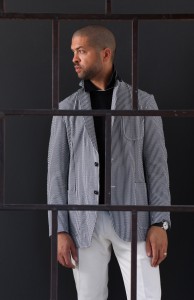 “Gangsterism is what I’m about to do with Fats Waller,” New York pianist and Blue Note recording artist Jason Moran says, following up the declaration with a full-on, guttural laugh.

“Gangsterism is how you take something apart,” Moran explains, “how you use it for yourself, and do it without permission—you make your own permission.”

Repurposing a work, whether it’s visual or auditory, has remained at the center of cultural discussions for the better part of the last decade, as the Internet’s pervasive presence has made one person’s ideas the world’s provenance. Updating and expanding on Waller’s musical technique serves as not just an entertaining notion but an interesting way to showcase the importance of an indispensable jazz performer.

As with any American genre, jazz piano is defined by a shortlist of twentieth-century players most can rattle off: Duke Ellington, Bill Evans, Keith Jarrett, Thelonious Monk. And while each of those figures deserves the legacy that’s grown up around their recordings, earlier performers are sometimes given short shrift. W.C. Handy isn’t a household name, but we’ve all heard his music. And the same can be said about Waller, a musician and performer who, in some ways, presaged the media characters we all follow on television, in movies and the on the Internet.

“Fats sings, he’s got this gregarious image, the hat, the cigar. Then what he’s playing, technique-wise, is remarkable,” Moran says. “Fats is coming from… older players… People don’t consider him a modernist the way they consider Monk [to be]… But what I heard in him was his sense of rhythm.”

After picking up on Thelonious Monk’s teetering style, Moran was taken by that rhythmic ingenuity and the songwriting skills he found in Waller’s work. It’s hard to not feel propelled forward when listening to his 1935 “African Ripples,” a composition that opens with a cascade of notes before settling into what seems like a lullaby and eventually turning into a staggeringly slow psuedo-blues.

“What [Waller] represents as a pianist, as a social figure, as a wronged composer… as a musician with a drinking problem… Where does Fats Waller end up in society?” Moran asks, outlining what his upcoming concert aims to explain.

A biographical sketch of the pianist and discussion of his talents is set to accompany Moran’s interpretation of Waller’s music. It’ll be a truncated one, seeing as Waller lived a life as vivacious as his music. And while some may believe a composition needs to be assessed in a vacuum, on its own terms, Moran says this sort of education and entertainment are an integral pair.

Showing off the cultural importance of Waller and his music is easy–he wrote standards like “Ain’t Misbehavin’” and “Honeysuckle Rose.” But adapting  his stride piano style, which was usually performed in small groups, was a more challenging prospect for Moran.

After asking himself that question, Moran rattles off genres ranging from Afrobeat to house. It’s clear he fully grasps each music he mentions, one leading to the next in a seamless world history lesson.

“There’re all these factions of rhythm that make people want to move,” Moran says. “And if that’s the case, how do I make people move? Where are the grooves?  And where do they align in how I hear music? That was the fun of it, trying to arrange that,” he says.

Focusing so intently on the music of players he admires may be part of the reason Moran hasn’t issued a new album of compositions in the last few years. But the time’s been spent with his family, as well as working as the Kennedy Center’s artistic adviser on jazz.  Moran books concerts for Anthony Braxton, Dave Holland and other genre luminaries; releasing new work is something less than imperative for him.

“What I enjoy most is being in front of people, playing,” he says. “It’s not a conscious move away from [recording music]… Before, I was focused on making records, because that’s the only thing I had to do.”

When Moran decides to unloose a grip of new tunes on the listening public, it will surely be a confluence of American styles and history. Until then, Moran’s more than satisfied with finding all those elusive grooves.

“We’re presenting a concert next week, and even if they’re not dancing in their seats, they should be moving their bodies a little bit,” he says.