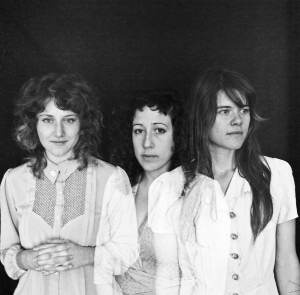 If you’ve read anything about the Bay Area trio Grass Widow over the last several years, it’s most likely focused on how good these women—and that point’s repeated ad nauseam, they’re women—are at writing and performing original music. The group’s work is usually shuffled off to the indie-ghetto with some mention of updated femme-harmonies. And while all of these things are important for the music’s origin, Grass Widow so easily transcends genre and gender, hearing about the Black Belles or (my favorite target for disdain) the Dum Dum Girls in the same breath does a disservice to the San Fran band. No, the trio hasn’t reworked rock tropes to create something new, but the fact that the ensemble was tapped to tour with the Raincoats should say a good deal about its talent. Over the course of two full-lengths and a single, Grass Widow displayed an affinity for pop, punk and odd compositions; the surprising progress and punctuating pauses in “Long Walk on the Beach” couldn’t have come from any other band. “Disappearing Industries” crops up on a relatively new split and echoes some of Grass Widow’s weirder tendencies before diving into the melodic portion of the track. A preview of the trio’s new disc conveys the sound of a band becoming an even more taut pop group. “Goldilocks Zone,” their latest offering, might not be as instantly gratifying as “Tattoo” from the Widow’s first single, but little is. The ensemble’s just well-rehearsed and imaginative. And it really doesn’t matter whether all involved sit down to piss. The Soft Pack headlines. (Dave Cantor)