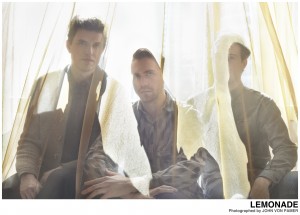 Although originally hailing from San Francisco, Lemonade bears little more than a passing resemblance to fellow Bay Area act The Limousines, avoiding the blood and glitter dirty electropop for a sound that is more indolent. Much ado is made about the band’s eclectic sound, a picking and choosing of numerous subgenres and sub-sub genres that leads to Billy Ocean drums and chillwave vocal lines meshing seamlessly with shoegaze misty drones and luxe synthesizer lines on one track, while another can boast Caribbean rhythms and manic percussion; Lemonade is more chimera than chameleon. The overarching vibe that holds most of the pieces together is that somnambulistic sensibility, the relaxed timbre that even their most manic tracks seem to carry. Here the band finds something in common with Balearic Beat music, a sense of well-paced partying that seems tailor-made for lasting long into the night, drawing out pleasure, rather than exploding in one fantastic, sweat-soaked mess, the instant gratification so many other current dance acts seem to trade in.

“Neptune,” off their newest release, Diver, is a prime example of the trance-inducing-yet-accessible song-craft Lemonade is capable of. A gently syncopated beat and swelling synths are joined by a pitch-perfect melody line to create a track which channels both its name and the name of its album with shocking effectiveness. Few songs seem as fitting for descending into the inhuman miasma of the ocean depths as “Neptune,” which instantly invokes images of gently purple worlds traced by shafts of moonlight and haunting, silent shipwrecks sitting upright in the gloom.

Many acts ride a cut-and-paste creative theory to critical acclaim, but few can boast creating such seamless collages as Lemonade. Their deft selections of the various electronic and dance genres swimming about in Sao Paulo nightclubs and Brooklyn apartments bear no scars or stitches; they are seamless, enthralling and, perhaps most important, inclined to move. (B. David Zarley)