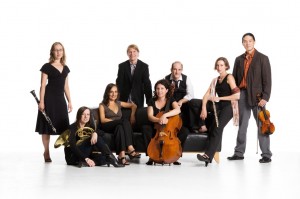 When Seth Boustead and some friends got together to play music by contemporary composers, they expected something like ten or fifteen responses to their call for manuscripts. They got more than a hundred.

Eight years later, the Weekly Readings project is going strong, with around eighty regularly participating musicians volunteering their time and a backlog of scores submitted by composers around the world. Each week, a group of musicians plays through a piece, records it and posts in on the website. The musicians only spend about two hours together, though they get their individual parts a month in advance of the session. A reading is not a polished performance, just a chance for the composer to get to hear what their piece sounds like out loud—a chance that can be hard to come by for composers who don’t have a pool of willing musicians at their disposal.

When Boustead finished school, composition was an almost completely academic field; the music coming out of it was atonal and inaccessible. “People were writing pieces that were basically just academic papers,” Boustead says. Knowing he didn’t want to go on in academic composition, Boustead started playing with friends, and posting calls for submissions. The Weekly Readings project eventually evolved, giving birth to what is now Access Contemporary Music, a multifaceted organization that brings together composers and musicians.

Over the years, a few things have changed—the music, for one. When asked what has shifted, Boustead cites two major changes: the return of tonality and the reemergence of an audience. Composers now in their thirties grew up listening to pop music, Boustead says, and their compositions reflect that. At the same time, composition has moved out of the university and much more into the public sphere. As this shift progresses, Boustead and ACM hope to see more organizations like theirs start up in other locations. So far, nothing quite like it exists anywhere else.