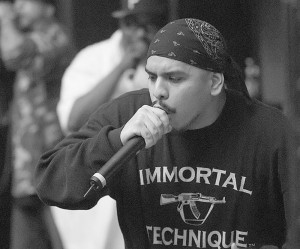 Focusing his career on the political side of American life, Immortal Technique has been able to attract a sizable underground following while terrifying anyone associated with mainstream hip-hop. The NYC-based MC probably didn’t plan that second part, but with samples about the U.S. government fighting the flow of cocaine into the country while its people pay for its import, there wasn’t too much chance at radio time. The space IT occupies is an important one, speaking for those who he feels have been discouraged from voicing displeasure with the country’s standard procedures. Over the last decade, IT has gotten comfortable coupling all those political accusations with a healthful dose of  nineties-styled production. Beginning his recorded career in 2001 with the first installment of the “Revolutionary” series, there’s not too much variation over the course of his next several releases. Of course, tossing in a few Spanish-language tracks breaks up the monotony. The move also allows for listeners to get a break from the fury IT unleashes—sometimes at unsuspecting targets, like vegetarians. What’s troublesome about IT’s perspective and the way he relates it to listeners—and this goes for anyone who counts Dead Prez and Brand Nubian as significant influences—is that the MC moves pretty quickly from criticizing the state’s pervasive racism to calling people honkies. Allowing consternation to sully an otherwise enlightened point of view only serves to undercut valid points the MC makes. He’s not even drawing from others’ experiences—IT reportedly helped build an orphanage in Afghanistan, giving him some real-world credence most politicized MCs lack. And while the unexpurgated anger related on each successive track is admirable, IT still functions within a Western system and hasn’t deviated from the practice while helming his Viper Records imprint. Also, the $21 door charge seems pretty steep. But maybe profits are going to be sent to Mid-Eastern rebels to repel Western influence. (Dave Cantor)