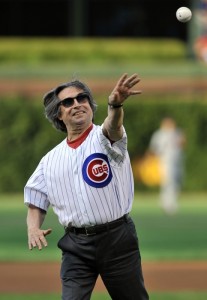 Not to take anything away from the Grant Park Music Festival across the street, nor Ravinia up on the North Shore, but it’s hard to think of the summer music season as having begun in earnest when Riccardo Muti is upstaging everything else by closing out the regular Chicago Symphony Orchestra season in late June this year. After leading the CSO on a triumphant tour of Russia and his Italian homeland, Muti is with us during the summer for the first time in his tenure as music director. That has its own curious advantages, including Muti being the first CSO music director to throw out a ceremonial opening pitch at a sold-out Cubs game at Wrigley Field last Wednesday night, an extraordinary feat for a man who will turn seventy-one next month who admits having no prior experience with the American pastime. (Yes, he took the task very seriously, did practice and cleared the plate.) It is part of what Muti has described as making the city at large more aware of the “extraordinary treasure” it has in its orchestra. As if that weren’t enough, Muti presented two Chicago premieres of rarely heard works by Prokofiev and Shostakovich along with a traversal of the Beethoven Fifth Symphony last week that was revelatory on every level (there is a final repeat Tuesday night). Muti likes his Beethoven large with a huge string section, which on sheer size alone, would suggest excessive Romanticism. Not so in the least. Muti’s tempos were brisk yet the sound was remarkably transparent and the playing flexible and remarkably exciting. Part of the reason for the huge orchestra is Muti’s careful application of a wide range of dynamics that was disarming in its contrasting delicacy and power. This week Muti conducts the Bruckner Sixth Symphony in a program that also includes the Paganini First Violin Concerto with CSO concertmaster Robert Chen as soloist. As part of Make Music Chicago 2012 to celebrate the first day of summer, Muti and the CSO are opening up its 10am-12:30pm Thursday rehearsal of this program to the public, free of charge. (Dennis Polkow)