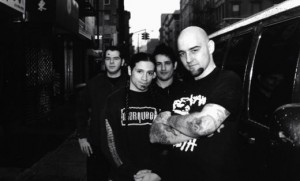 Murphy’s Law is, and always was, pretty much Jimmy Gestapo and some guys behind him playing music. Cropping up in the mid-eighties, the band can’t really be considered a trendsetter of the New York hardcore scene. The ensemble, though, should be recognized for taking some of the seriousness out of the genre, which was becoming more codified and stodgy with each passing year. Of course, no band from the era could resist trash-talkin’ the president. So, the 1986 track “California Pipeline” and its closing refrain, “Ronnie Reagan, he’s my man/If he can’t do it, no one can/America rules,” should be understood as a sign of the times and an extension of the band’s ham-fisted humor. No one said hardcore had to be thoughtful music. On Murphy’s Law’s “Back with a Bong,” there’s a substantially broadened musical palette, which accompanies some half-hearted rasta chanting. Fishbone’s Angelo Moore even shows up and contributes some horn lines, making the Third Wave intentions Murphy’s Law has been associated with a recorded reality. Unfortunately, some tracks, like “Yahoo,” descend into the miasma of marching band-cum-rock troupe. Considering half the lyrical content Jimmy Gestapo and crew churn out touches on compelling subjects like drinking too much and smoking a boatload of dope in the morning, it’s unsurprising. On the band’s second album, they merge the wealth of aggressive music floating around NYC on the opening track, and wind it up with a decent distillation of hardcore. A punkier thread of thrash and straight hardrock should count for something: the band’s recorded legacy is as much a function of the fact that it’s an ensemble birthed in the eighties as it is the most bizarre act from the NYHC scene. Springa (SSD) Sonic Droogs and the thugs in Skarhead open. (Dave Cantor)