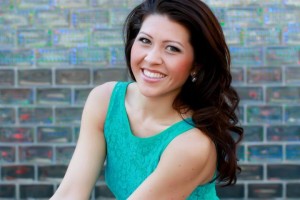 Twenty-eight chairs were set up at Mather’s Café in Jefferson Park, a café geared toward seniors. A section of the building normally used for exercise classes was partitioned off with a yellow curtain.

Miss Chicago 2012, Marisa Buchheit, walked in wearing a red one-shoulder dress along with her white sash and four-point crown. She had a guitar swung across her back and audio equipment in both hands. She fiddled with the AV system, which had been playing oldies on a satellite radio feed, to make sure her equipment worked.

Buchheit wowed the crowd with her ingenue voice. Carol Ruiz, who held hands with her husband through the entire performance, had tears in her eyes when Buchheit sang “If I Loved You” from the musical “Carousel.” After the performance, Ruiz told Buchheit she understood Czech, and asked if she knew the language, since she sang it so well.

She’s been Miss Chicago since March, and will be competing in Miss Illinois in late June. She’ll have ninety seconds to show off her talent, so she’ll be singing an excerpt of “Song to the Moon” from Antonin Dvorak’s opera “Rusalka.” 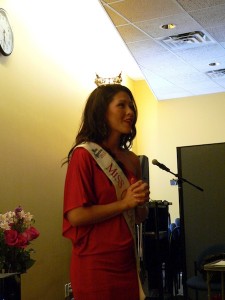 But Buchheit has a more contemporary side as well, and after her karaoke-style opera and musical selections, she took off her Miss Chicago sash and put on the guitar. In January, she released an album of songs she had written under the name Mari Therese—her middle name, which she said is “more folkish than ‘Buchheit,’ which is older and a more operatic name.”

One of Buchheit’s influences is Joan Baez, whose voice she compared to that of an opera singer in her rich vocal tone. She sang Baez’ song “Plaisir d’amour” on Friday. “I discovered her last year when I started getting more and more into songwriting. I stumbled upon her and I was captivated. Ever since, I’ve wanted to be just like her when I grow up.”

“One of my goals is to make opera more accessible and making pop cooler by adding opera elements,” she says. Buchheit closed out the show by accompanying herself on guitar while singing “O Mio Babbino Caro.”

Buchheit studied opera at the Cleveland Institute of Music. She graduated in 2009 and had difficulty finding a job. She eventually found work doing PR for the Oak Park-based Verismo Opera Theater and was appointed director of public relations a week after winning Miss Chicago. Her father, Paul Buchheit, is a college professor who writes for political websites like Common Dreams, Truthout and the Chicago-based Buzzflash.

“I had a lot of cynicism about pageants when she first started—me and her brother,” said Paul. “But seeing these young women having to get up in front of a crowd and answer tough questions has really turned me around. And [Marisa]’s become more confident the more she’s done this,” he says.

Paul has given her plenty of preparation for the current-events questions. “My dad has always stressed the importance of knowing current events to me and my brother,” says Buchheit, who wrote a piece on music education for Buzzflash last February.

Buchheit has been a vegan for ten years, and as Miss Chicago she has promoted a vegetarian lifestyle. The day after her performance at Mather’s, she was the grand marshal in Chicago’s Veggie Pride Parade. It’s Chicago’s first, inspired by one in Paris that’s been going for ten years. The parade ended in Grant Park, where she sang “O Mio Babbino Caro” for the crowd, this time without the guitar. Her dad was disappointed that they didn’t have the permits to set up food stands. “It only makes sense if you’re going to have a veggie pride parade, you have a food stand,” he says.

The day after the concert at Mather’s Café, Buchheit was off to a fashion shoot at Reggies Live in the South Loop. When Buchheit arrived, the photographers swarmed to her and the models were anxious to meet her, but eventually she got to work, doing a photo shoot on the roof of Reggies, the Chicago skyline in the background.

Renee Romito, a hair designer based in Mokena, Illinois, did her hair. “She’s so sweet,” she said. “I can’t believe she’s only twenty-two, younger than I am.”

The Miss Illinois pageant will be held June 27-30 in Marion, Illinois.