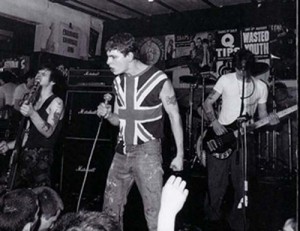 The States are woefully short on soccer riots. So, if there’s one band that should do well, working in that vacuum, it’s the Cockney Rejects. During the band’s brief early eighties heyday, the United Kingdom group was best known for stuff like “War on the Terraces” and “I’m Forever Blowing Bubbles.” Tossed on the heap of bands Garry Bushell dubbed Oi!, the Rejects kicked on for a few years after issuing “Greatest Hits” in two volumes as a pair of cheeky 1980 albums. Everything skinners-in-training need to know about the band—and a bit more—is contained on those discs. There’s a wealth of coulda-been hits if someone had taken the time to ramp up a proper punk/Oi! chart thirty years back, but “I’m Not a Fool”’s as catchy as the genre gets. With songs about the oppressed working class and patriotism, the group’s set, which was clearly shaped by the tail end of Reagan’s term, should please all the sweaty, baldheaded dudes drinking cheap beer, waiting for a fight. You know what was a good song? Just about anything Ian Stewart wrote before he went full-on Nazi—and even some of the stuff after that was pretty decent if you don’t take the international Jewish conspiracy too seriously. And you shouldn’t. But bands covering Stewart’s music usually get a sidelong glance. And The Brassknuckle Boys are currently getting that look. Its cover of “The Voice”—posted on the group’s website, because who buys CDs by those guys—doesn’t have the automatic drumming Stewart was able to whip out of his followers, but it’s still a good rendition of a pretty great song. Let’s just ignore all that stuff about Zionists running the media. (Dave Cantor)