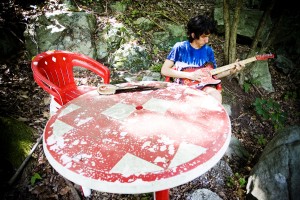 Working under the stage name Delicate Steve, Steve Marion issued “Wondervisions” last year through the David Byrne helmed Luaka Bop imprint. The disc was an odd combination of pop music run through international concerns and dashed with enough polyrhythmic fervor to garner a touch of underground acclaim amid releases by all those beach bands. The same sort of optimism bursts from each Delicate Steve composition as from the coastal stoners’ work; Marion’s recordings are just better orchestrated and performed. Returning with “Positive Force” (it has nothing to do with straight-edge hardcore), Delicate Steve forgoes some of the more electronic moments of his debut. Produced by Yale Evelev, the gentleman behind some Os Mutante’s round-ups and Luaka Bop’s reissue of Shuggie Otis, Marion continues cutting through rhythms birthed south of Belize and calmly wringing out spindly guitar lines best slotted into the Lower East Side. Playing each and every note on his latest disc finds Marion dispensing with a wealth of lyrics, moaning out “Two Lovers” again and again on the track of the same name, and not too much else. With so much going on—that sedate guitar, some supplemental percussion and a buzzing keyboard note running throughout—it’s hard to get bored. But what it’s easy to do is lump Delicate Steve in with all those aforementioned beach bands, especially early Ducktails’ recordings. There’s significantly less pop influence here, unless Brian Wilson and Joe Meek’s most bizarre rock moments actually count as pop. The album’s title track might do well as part of a soundtrack to a film about gypsies. But since that group of folks is European, some of the afrobeat drumming—or even the slide guitar—might be out of place. Marion just deftly assimilates it all and seems to do it relatively easily. (Dave Cantor)