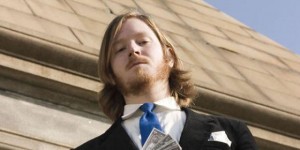 One of the Pitchfork Festival’s best features is its ability to create ancillary events in the community. Of course, all these resulting shows and parties are just as packed as the festival, so hitting up any sort of entertainment can be burdensome. Pairing once-local comedian Hannibal Buress—yes, his parents named him that—with some of underground hip-hop’s most innovative producers rivals any grouping of performers at this year’s proper festivities. After a day filled with A$AP Rocky and BIG K.R.I.T., an instrumental interlude from the fingertips of former Chicagoan Jel should come in handy. There’s enough boasting in hip-hop, regardless of an MC’s actual talent. But Jel’s shadowy samples, flavored with a bit of looming sci-fi analog synthesizer, have been at the periphery of the genre for over a decade. Buress worked out of Chicago before heading to the East Bay along with anticon co-founder Adam “Doseone” Drucker, resulting in some utterly bizarre recordings—Them and Clouddead will always rank as collector fair, but each deserves the spate of critical love poured down upon it. When not working up production in team mode, Jel began issuing work under his own name, with a pair of 2002 albums released through Mush Records. Both “10 Seconds” and the first installment of the “Greenball” series comprise a handful of snippets, surrounded by longer compositions making use of easy listening vocals, instrumentation uncommon in hip-hop and basslines so heavy they’re capable of knocking out your speakers. And Jel hasn’t changed his approach to beat-making much. It might be stagnation or just an adamant belief in the endless possibilities of hip-hop’s bedrock beats. Either should be acceptable. Kyle Kinane, Rockie Fresh, Serengeti and DJ Tony Trimm open. (Dave Cantor)