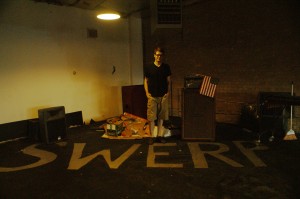 Nestled between a greasy sandwich joint and a defunct hair weave shop on the West Side is the door to the stairway to DIY heaven. Swerp Records, a small label run by Matthew Nix out of his loft called “Swerp Mansion,” is the product of his efforts along with other members of the South Suburban music scene. Having leased their space only just over a month ago, the label operates out of the location, hosting shows, pressing T-shirts and doing everything they can to provide an environment where their music can thrive.

“We’re trying to put off breaking bands up as a result of money or lack of momentum as long as humanly possible,” Nix says of the eight diverse bands currently signed to his label.

“We don’t have any doom bands but we have most everything else at this point,” Nix says. With bands ranging from math rock three-piece The Para-Medics to the femme-fronted Ratboys, that’s not too much of an exaggeration. All together, they’re the best of South Suburban music. 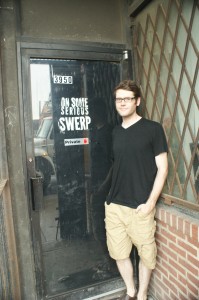 Nix launched Swerp in May with the help of Jonathan Mondragon, who now does booking for the label. “The two of us sat down, came up with a short list of about a dozen bands that we wanted on board with this, got seven of them, sat three of them down [and] got them in one of the best recording studios we could find in Chicago,” Nix said.

In just several short weeks, Swerp has already taken off. “We hit a thousand Facebook likes within our first month of being open, we were reaching about 35,000 people, we had interests from Japan and Italy and… the Ukraine,” Nix said.

The identity of the label, according to Nix, is “the lost twig of the Chicago family tree.” Swerp’s suburban musicians took influences, whether on their sound or their persistent DIY mentalities and eventually moved to the city itself. “Now that we’re established better in Chicago, it’s the world,” Nix said.

Plans for Swerp are big, but rooted deeply in long-cultivated friendships. “Most of what’s going on now in the whole DIY community is just built around friends,” Nix said, “Once you have those roots you can kind of grow and do anything, and we have really strong roots.” Nix pointed out his relationship with Para-medics drummer and member of several other Swerp projects Nnamdi Ogbonnaya as one lasting since high school.

“There’s something about that that resonates—having that sense that there’s a group of guys out there that are just like your friends that are making stuff, really awesome stuff, and just, ‘Oh god, me and my friends could be making really awesome stuff!’ And then you do, and then you’ve got just awesome stuff starting to spring up all over the place,” Nix says. 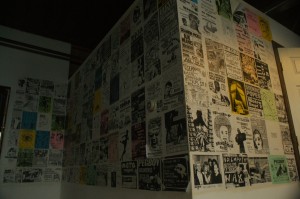 He wants Swerp to be a “call to arms” to musicians, to be an example of a group of people making it work. The ultimate success of the label and the bands is secondary; what comes first is setting an example for other small music communities that tend to discourage themselves from making their music available to the world. “We’re making something and we’re putting it out there and we’re not trying to shy away from it.”

The Swerp Mansion loft exists where past DIY punk rockers have trod. Formerly named the Lucky Gator Loft, the space used to host regular punk shows, with the likes of Dillinger Four, The Ataris and Smoking Popes playing there.

Swerp was unaware of the loft’s former purpose when they were in the market for a home. “As we walk in and we’re starting to take the tour we’re like, ‘Wait, hold on, this place is covered in punk posters, hold on, one of the bedrooms is clearly wired to be a recording studio,’” Nix says.

Filling the shoes of the previous inhabitants of Swerp Mansion is its own challenge, but Nix faces the task of running his label and DIY venue with confidence. “It wouldn’t have made any sense if I didn’t completely believe in the bands and the sound, and these bands are really fucking good.”