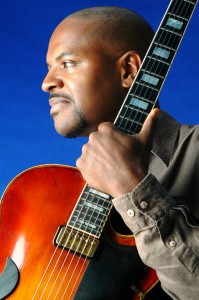 It’s hard to get a bead on guitarist Bobby Broom. Not too many folks start a career in jazz on the East Coast and move to Chicago, but this guy did it. There isn’t an endless list of guitarists who have worked with swampy R&B players like Dr. John as well as improvisers like David Murray, to say nothing of Sonny Rollins and Weldon Irvine. Broom’s time as a sideman has informed his solo recordings, not so much in a stylistic sense, but in that the guitarist doesn’t overwhelm any of the discs under his own name. There’s as much room for sax solos and the round tones of keyboard as Broom’s spiraling improvisations. With the Windy City’s substantial history in cerebral jazz modes, Broom’s take on the form might not be slotted into notions about Fred Anderson, Sun Ra or next-generation folks like Jeff Parker. Assimilating ideas from bop and blues is Broom’s modus operandi, exalted through solo work and as a part of the Deep Blue Organ Trio, a funky ensemble as likely to jam on “Root Down” as it is to revamp Stevie Wonder classics. The openness exhibited in free players finds itself expressed in Broom’s willingness to explore and develop his own translation of American music in any setting, not just shriek through his six strings. Given such a reverence for what’s come before him, it’s almost unsurprising that Broom’s career is a bit short on original compositions, but that too may be related to his past, performing alongside genre luminaries. His own “Dance for Osiris” leads off the decade-old Delmark date, “Blues for Modern Man.” The composition could have easily sprung from an early sixties Grant Green date—there’s that little chording. And in a trio setting for a four-night run, audiences should expect nothing less than gratifying jams encompassing jazz and blues’ syncopated history. (Dave Cantor)