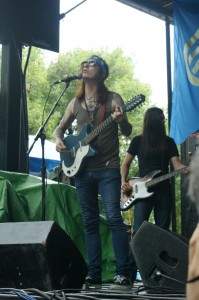 Showing up on time for Pitchfork each day was rewarding because of the lesser-known local acts in the lineup this year. Of course it’s exciting to have bands, DJs and rappers come in from around the United States, Canada and overseas, but having a few Chicago acts on the bill keeps the festival grounded and proves to festivalgoers as diverse as the artists on the bill that our city can hold its own in the world of music.

The first local band I saw was the first band to play at Pitchfork this year, Outer Minds. They play that kind of garage rock that I find impossible not to enjoy, no matter how well or how poorly it is executed. A fun band, refreshing and just too cool, their set was perfect for ringing in this year’s fest.

Later that day Willis Earl Beal, whose booming voice is reminiscent of Chicago blues music, performed on the same stage. Accompanying himself with nothing but an old-fashioned tape machine or a few strings plucked on an electric guitar, Beal captivated his audience, many of whom were curious to see what all the hype was really about. A one-man powerhouse of a performer, Beal has an almost magical voice that he can bring from a soft murmur to a roar. It’s captivating either way.

A Lull opened Pitchfork on Sunday. Also from Chicago, they seemed excited to be playing their ambient-tribal tunes. I am really just a sucker for any sort of quality homegrown music, and A Lull satisfied me in that department (plus they gave away free download codes for their new EP, “Meat Mountain”).

The icing on the cake for Chicago music fans at Pitchfork though was the unannounced appearance of young rapper Chief Keef and his crew. Keef appeared unannounced (aside from a few Twitter rumors), at the end of AraabMuzik’s set. Just sixteen years old, Keef has blown up in recent months, apparent in how much of AraabMuzik’s crowd and even those waiting for Beach House were singing along.