We saw a lot of weird stuff at Pitchfork this year, not including Lady Gaga checking out Kendrick Lamar. Mostly, though, we heard a lot of weird stuff—and that’s not even counting the music playing on stage. These are a few of those highlights, coming from the people on stage, in the crowd and by the fifty-odd  Porta-Potties in the middle of the park. 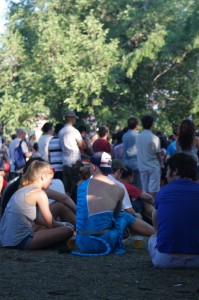 “Y’all have been very nice watching me be self-indulgent.” –Willis Earl Beal

“Wow there is a massive crowd here.” –Security guard at Japandroids, just before pulling out a dozen crowd surfers

“Let’s first pee a little and then let’s eat something.”

“It’s getting Feisty.” –Walking toward the Green Stage to see Feist

“Show us your tits!” –Yelled at Feist, as people slow dance in crowd

“Hey look, Daddy’s on that screen over there. I gave birth to all of you. It took twelve hours under the sign of Saturn.” –Atlas Sound talking to crowd, pointing toward video screen

“Little miss, can I make a recommendation. Don’t give her cold water, give her room-temperature water… A little something I learned in Boy Scouts before they kicked me out for being a queer… God bless our country, god bless our Boy Scouts.” –Atlas Sound talking to woman pulling fainting girl from crowd

“My intention is to touch you, to deeply touch you. Like when you go to the doctor.” –Atlas Sound

“The rain killed my shit. Love you all.” –Atlas Sound

“It just occurred to me that I’m drunk as fuck.” –Flying Lotus

“Make some motherfucking noise for my niggas in the tree.” –Danny Brown, after a couple people climb a tree by the Blue Stage and one of them pulls up a beer with his toes

“Did you hear about the Mississippi houseboat?” –Multiple people before Grimes

“Shouldn’t have worn new shoes, man!” –While trekking through Saturday’s mud pit between the Red and Green Stage 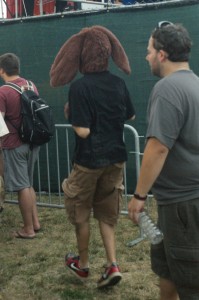 “I like your tail.” ­–In praise of a girl’s hair braid

“I think I wanna go to school to be a vet tech, ’cause then I’d get like benefits and a steady income.”

“Every girl has some way of being catty, it doesn’t matter what it’s about.”

“You lost a biohazard bag in the middle of the path. Such a good photo op.”

“You fuckin’ serious with that, dude? Wait in line like everyone else! You can’t just whip your dick out and start peeing!”

“Someone just walked up to me and said my hair was beautiful.”

“I smoke weed and it’s like a four-hour pass-out.”

“Don’t surf the train. Ride inside!”

“I like weird cards.”
“Then this is definitely the greeting card company for you.” –At the justWink booth

“And I was Muammar Gaddafi!”

“I have a question…‘Is your bed made?!’” –One Vampire Weekend fan to another, while singing along to “Cape Cod Kwassa Kwassa”