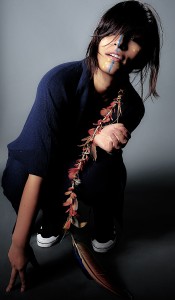 After a long period with the Chilean rap group Makiza, French-Chilean rapper Ana Tijoux (born Ana Maria Merino) set out on a solo career. She gained recognition through a collaboration with Mexican singer-songwriter Julieta Venegas on the hit single “Eres Para Mi,” a semi-acoustic track that had a strong R&B influence and helped introduce Tijoux into mainstream Latin pop.

Tijoux was born in France to exiled Chilean parents who fled to Europe during the Pinochet regime. When democracy returned to the country in 1990, part of her family returned to their motherland, and Tijoux started her career shortly after.

Live, Tijoux has a great sense of humor. On a clip that has made the rounds on YouTube, she jokes about how things got lost in translation during her first United States tour because she couldn’t speak English very well back then (she does speak both French and Spanish fluently). Her style differs from most Latin hip-hop artists because her rhymes are mostly devoid of violence. Many of her lyrics are very autobiographical, as heard on “1977,” the lead single of her 2009 Grammy-nominated album of the same name.

This will be her second Stateside tour following appearances at SXSW and the Latin Alternative Music Conference in New York (she is scheduled to perform at Celebrate Brooklyn as part of this year’s edition of the event). (Ernest Barteldes)