Bite-sized reviews of the shows we caught this weekend. Dig in. 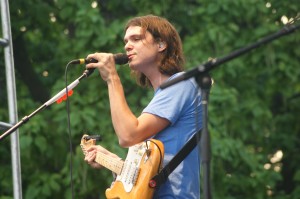 Outer Minds. The band opened Pitchfork 2012 with sunny-day garage rock in their hometown Chicago after a rain delay.

Lower Dens. Few people heard of them before Friday, but Jana Hunter and Co. showed they could rock and were one of the best early afternoon bands of the weekend.

Willis Earl Beal. Whiskey bottle in hand, Willis Earl Beal performed in front of the street he told the crowd he used to ride his bike down. Key word: “performed,” swinging his mike and jumping around stage—until the last song—with nothing but a tape deck to back him up.

Olivia Tremor Control. At their best, this Elephant 6 band sounds a little bit like southern Beatles; at their sloppiest, they come across as a curio collection of oddities and eccentricities. Unfortunately, the latter was on view for most of their set.

A$AP Rocky. Rocky seemed to want to get thrown out of his own show, crowd surfing and using his mic to invite the ladies to party with him afterward and ask who had weed.

Japandroids. Energetic duo Brian King and David Prowse played to an energetic crowd, keeping talking to a minimum and rocking to the max.

Dirty Projectors. The Projectors didn’t drive people crazy, but they did deliver the best-sounding set at Pitchfork.

Purity Ring. Choppy beats and ethereal vocals made the small stage feel like a dark club, complete with adolescent face-sucking.

Feist. With mixed success, Leslie Feist attempted to get the crowd to sing as couples slow danced and someone asked her to “show us your tits!” Request denied, but a rockstar show nonetheless. 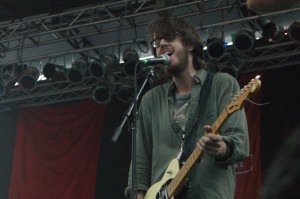 The Psychic Paramount. Taking everyone who equated guitar-heavy, instrumental rock with Explosions in the Sky by surprise, The PP laid low a few hundred people with heavy-metal riffs and powerful drum beats.

Cloud Nothings. In a stroke of bad luck, rain sabotaged these Cleveland garage-punks’ set, causing them to stop playing after a crowd sing-along at the end of “Wasted Days.”

Atlas Sound. No hour-long cover songs, just Bradford Cox at his finest, looping his guitar and supplementing his voice with harmonica in a beautiful acoustic version of “Walkabout.”

Liturgy. If there is one thing that the average Youth Lagoon fan does not listen to, it is “Transcendental Black Metal,” but those who wanted a good spot put up with it. Others left.

Cults. Terrible audio and uneven vocals marred a set from Cults that could have been good.

Youth Lagoon. Did anyone know Youth Lagoon could turn up the bass? Anyone?

Nicolas Jaar. Nicolas Jaar’s slow, pensive beats made me wish I was lying on my back staring at the clouds, not pressed up against the sweaty masses.

Wild Flag. Four veterans of the riot grrrl movement make up Wild Flag, who played one of the best shows of the fest, complete with some crazy guitar licks and high leg kicks.

Schoolboy Q. Flat beats and rhymes made for a disappointing set by this West Coast rapper.

Sleigh Bells. Alexis Krauss and her guitar duo blew most other acts out of the water in terms of dynamism.

Hot Chip. The electronic band brought the fun this weekend, with a great Fleetwood Mac cover and a reason to dance in the mud.

Godspeed You! Black Emperor. The reunited Canadian post-rockers played non-stop for their ninety-minute set, treating fans to the epic kind of music you don’t get to see every day.

Grimes. The crowd was feeling it, but the danceable beats were frustratingly short-lived as Grimes shifted from mode to mode and mood to mood. 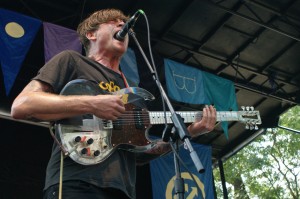 A Lull. Percussion-driven, tribal-sounding music from A Lull sounds African-inspired but is actually from right here in Chicago.

Unknown Mortal Orchestra. With great guitar solos from frontman Ruban Nielson, UMO reveal themselves to be a psychedelic jam band on stage.

Milk Music. If Milk Music does not make good music, at least they have the ability to make people smile with their somewhat goofy appearances and personality.

Thee Oh Sees. In what must have been a horrible scheduling error, John Dwyer and his psychedelic garage rock group played at the same time as Ty Segall, but he found time in between his wacky, distorted songs to give Ty a shout-out.

Ty Segall. There was fun to be had at Ty Segall’s set, no matter if you walked to the back of the crowd after Thee Oh Sees or were in the front mosh pit that Segall himself eventually crowd-surfed over.

Real Estate. Some of the guitar solos felt shaky, and it seemed like Real Estate was content with playing most of their songs just a little bit slower than usual. Still, the band was an audience favorite, and it’s hard not to tap your foot to the “Budweiser, Sprite, do you feel alright?” refrain of “Suburban Beverage.”

Kendrick Lamar. Sometimes it’s hard to see past the misogyny, as with Kendrick Lamar’s performance. At least Lady Gaga enjoyed it.

Chavez. Chavez’s heavy, dull rock might have felt more appropriate at home in the garage, stoned.

King Krule. In recordings, the deep baritone of Archy Marshall makes it easy to forget he’s not yet twenty. On stage, it’s a little more obvious: Marshall and his backing band seemed under-rehearsed and not quite together, though they did manage to put on the jazziest set at Pitchfork despite missing a few downbeats.

Vampire Weekend. Love them or hate them, it’s hard to deny that Vampire Weekend put on one of the best live performances of the weekend, completely at ease on stage for their first performance in months.