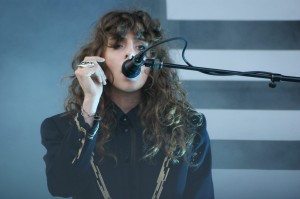 I was already tired by the time I got to Pitchfork. Coming down the stairs from the Green Line at Ashland, we music-seekers had already been assaulted by the first wave of hawkers and scalpers crowded at the base of the stairs yelling about tickets and ice-cold water. These people looked serious—this was supposed to be fun, not some kind of death-march I wasn’t prepared for, right? I thought of the heat, the crowds, the no re-entry, and I felt old.

Right after entering, a kid made a dash through the ticket line. A pack of security guards was on him like excited lions after a lone gazelle on the savanna. When they caught him, they walked him back to the entrance and gutted his backpack piece by piece before sending him on his way. This scene repeated itself about five times that day.

I walked into Lower Dens’ performance as they were playing “Brains” off their new album, “Nootropics”—it’s one of those songs with an energy that slowly builds in you, awakening a sense of expectation and excitement for something unspecific: “Starting the day / staying awake / everything will change / while you’re asleep / while you’re breathing…”

Next came Willis Earl Beal, the South Side sensation who has received such hype here in Chicago and elsewhere. As expected, his show was raw and intense. Listening to his studio recordings doesn’t convey the fullness of his voice—he never seemed to come down from full belt, putting all the energy a person could put into a performance. He wore a black T-shirt with a cartoon face and the word “NOBODY” printed on it, and a black cape with the same face, presumably hand-drawn; he drew the cape into his dynamic performance, pulling it over his head, lifting it in front of his face, beating the stage with his fist. Beal asked for everyone who had ever cried to clap along to his last song, bookending the set with a cappella performances.

In contrast to Beal’s anima was A$AP Rocky’s persona, the first of the weekend’s trap hop-heavy hip-hop lineup. Rocky and his entourage jumped around, hyping up the audience about rolling and hustling and swag, while the American Apparel crew threw up their hands and bounced on command. To his credit, Rocky brought a lightness to his performance that suggested he knows just how much of a game it is, taking it in stride when security cut short his crowd-surfing attempt. Rocky’s set was the most fun of the hip-hop sets this weekend. Big K.R.I.T. seemed tame in comparison; Schoolboy Q’s beats felt lifeless; and I have no problem admitting that I walked out of Kendrick Lamar’s show when it turned into a repetitive chant of “pussy and Patrón,” as if the dude was waiting for both to be served up to him on a goddamn platter. Maybe next year Pitchfork can find some hip-hop artists who don’t trade on drug-dealing and objectifying women for commodifiable authenticity? That shit just isn’t getting any fresher.

Clams Casino’s bone-shaking beats were a highlight of Friday’s lineup, as were Purity Ring’s trance-inducing ones; nothing quite beat the sixteen-year-olds who made out for a full five minutes of the Purity Ring set without detaching their lips once. That’s right, guys, I was totally watching.

Saturday was the day of the mud pit; many a canvas shoe met its maker. Half the festival audience huddled under tents for a good part of the day, shaking in their cutoffs. Sound quality problems at the Red Stage kept the Cults show from greatness. Flying Lotus got people moving in the afternoon with possibly my favorite show of the weekend. He kept people guessing with his dynamic mixes, pulling a hot, tired crowd out of its lethargy. Hot Chip got most of the crowd dancing with its driving, disco-inflected electronica—brave souls unconcerned with cigarette butts, spilled beer and probably urine got close to naked and owned the mud pit. Sleigh Bells gave what was probably the most dynamic show of the weekend; frontwoman Alexis Krauss psyched up the crowd with a genuine, unforced dynamism.

Sunday lagged. Highlights included security personnel tirelessly chasing down those intrepid young gate-jumpers; the old folks contingent (ok, probably in their forties) camped out in a patch of shade by the first aid tent; the free frozen kefir (seriously delicious, a far cry from the health-food store substance my grandmother forced me to drink as a child); Flatstock, with its whole row of beautiful silk-screened band posters and the beautiful, sad artists who made them; and the Peace Corps guy who told me about his tattoo of the titanium rod put in his leg after he got hit by a car (“I’ve had a pretty good life since then”). I’m not so sure about the Book Fort: the great selection of small-press offerings was in line with Pitchfork’s indie scene, but who’s really going to listen to authors read from their work when there are several loud concerts going on?

Beach House put on a great show, even if the placement of their low-energy act seemed odd for that late in the day. Victoria Legrand thanked the audience multiple times for being there, and sounded so genuine when she asked if everyone was feeling good that I wanted to give her a hug. Vampire Weekend closed off the weekend; I’ll admit that I’ve always thought of them as preppy Paul Simon imitators (with a touch of Prince?), but their set was tight and high-energy. Not until these final moments of the weekend did the crowd really seem to let loose and dance. Silliness abounded, and I went home smiling.