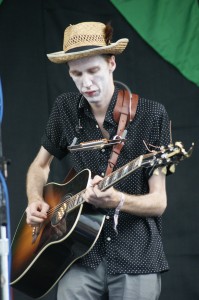 Back in high school, my drumline instructor wanted me to punch him in the face every time I played the drums. “Come on,” he would say, “Let’s go! Punch me in the face this time.” It was a violent way of saying something true of any kind of music, and especially true of Texas drumline cadences: Music, as the saying goes, ought to move you. Music, played passionately and beautifully, ought to move you all the way across the room and out the door, hit you square in the chest and make you yelp. Why else do people scream at concerts?

The trouble with Pitchfork, and with any music festival, is that it can be exceedingly difficult to get that musical fist in the face. Moving from stage to stage, from the loud rock of Japandroids to the soaring vocals of Dirty Projectors, it’s easy to go musically numb and become unresponsive, even when it’s A$AP Rocky urging everyone to “go fucking crazy.” This is only a problem for the non-fan, of course: to the crowd of crazed, jumping bros and gangstas answering Rocky’s call for a smoke by throwing blunt after blunt on stage; to the crowd of people putting up their “3s” at Danny Brown’s request; to the mosh pit that erupted when Iceage played their first notes, nearly knocking down everyone standing around them; I salute you all, though I don’t understand what it is about these acts that drives you so crazy.

Even when you’re a fan, though, it can be hard to feel so moved. Real Estate played a good set Sunday afternoon, but there were few moments that made me want to jump up and down and sing. Even Dirty Projectors, whose incredible Friday night show was probably the best-sounding set all weekend, was more gentle embrace than punch in the face. Neither band is particularly loud, heavy or hard-rocking, but that’s no excuse: any kind of music, fast or slow, is capable of being overpowering and all-consuming. That punch in the face, that feeling that grows from tingle in the spine to shiver in the body to leave you a shaking, jumping, screaming fangirl, is part of the reason we listen to music in the first place.

It’s also, if Bradford Cox is any representative, part of the reason people make music at all. Performing under his Atlas Sound name, Cox was barely shielded from Saturday’s afternoon downpour when he joked about playing a cover of Blind Melon’s “No Rain.” “But I won’t do that,” he said with a smile, putting an end to the nervous excitement of everyone who remembered the hour-long cover of “My Sharona” he performed in Minneapolis earlier this year. “My intention is to touch you, to deeply touch you. Like when you go to the doctor.” Face painted white for the show, Bradford Cox played the part of tragic clown well.

In music as in onstage banter, Cox can confuse as much as amuse. His lyrics range from the cryptic to the clear, and often—as in the first couple of songs of his Pitchfork set—it can be hard to make out the words at all. Layering guitar loop on guitar loop, Cox set each song’s melody in motion before adding vocals that sounded closer to those of Panda Bear’s Noah Lennox than his own relatively clear tracks on last year’s “Parallax.” But when he quit playing around with the effects pedals at his feet and stuck to guitar and the harmonica, singing a slow, stripped-down version of “Walkabout,” the result was, if not a punch in the face, a tingle in the spine, and one of the best single-song performances of the weekend.

It’s difficult to explain exactly where that tingle comes from, what it is about a song like “Walkabout” or a set like the one Vampire Weekend put on to close the festival that make them so moving. It can be just as difficult to say why something fails to do so. A friend of mine who, after much convincing, came with me to hear Vampire Weekend’s show, left after a few minutes to go sit on a bench. She considered listening to her iPod to avoid hearing the show, which disgusted her in a way she couldn’t put her finger on: it wasn’t the beats, it wasn’t the vocals, it wasn’t that good-looking singer or leg-thumping bassist. It was Vampire Weekend, and it was terrible.

I’d like to tell her that she’s wrong, that Vampire Weekend, despite all their detractors, are making some of the most innovative pop music (with or without the “indie” qualifier) around, and I try to tell her this, arguing in favor of their witty lyrics and beautiful arrangements. But it’s hard to argue with the nerves, even when the evidence is an acoustic, clap-filled rendition of “I Think Ur A Contra” and the pounding chords and emotional crescendos of “Walcott.” I guess it’s just a punch she can’t take.