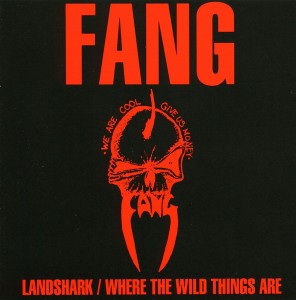 For the remainder of Sam McBride’s life, his public appearances are going to be marred by an incident that occurred in the late eighties. He up and killed his girlfriend, reportedly during a smacked-out frenzy. It’s pretty much impossible to skirt the fact when mentioning his band Fang, which counts as a reasonably important part of the East Bay’s punk and hardcore scene. From the time Fang started laying waste to cheapo recording setups, McBride—or Sammytown as he’s now known—made clear he had a fascination with drugs and warped characters. The beginning of “Red Threat” includes a weird a cappella group sing-along about Charles Manson being God. And no matter how good the cult leader’s “LIE: The Love And Terror Cult” album is, hearing Sammytown and his cohort joke about mass murder makes the event which sent McBride to jail difficult to wrench away from his lyrics. Fang’s oeuvre—a word not too frequently applied to the shambolic punk stuff the band recorded—includes tracks detailing a woman spiking her boyfriend’s drink with acid, what junkies do on the daily, lewd sex acts and confusion about how someone becomes a werewolf. What’s remarkable about Fang and Sammytown, specifically, is that each maintained enough influence to have music written before the singer’s jail stint wind up on various Nirvana bootlegs. The fact that Kurt Cobain was enamored of a murderous junky’s artistic life isn’t surprising, but hearing how Fang tracks like “Fuck and Suck” and “An Invitation” could have been easily slotted in to the 1989 Sub Pop issued “Bleach” is pretty revealing. There’s more to Sammytown’s saga than Fang’s early recordings, but that’s most likely what this revitalized troupe is going to roil on when it hits town. (Dave Cantor)