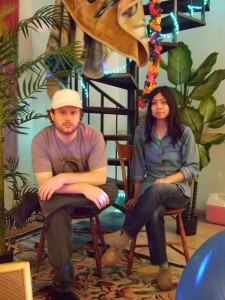 The short journey from obscure indie-imprints like Siltbreeze to better-known labels hasn’t taken Blues Control too long. Of course, the principal duo—Russ Waterhouse and Lea Cho—did time in a group called Watersports prior to leaping off into this project during 2006 with a few low-key tape releases. But pretty quickly the duo’s torpid jams attracted a fan base willing to seek out all those difficult-to-find recordings. From release to release, Blues Control takes on an interesting swath of sound, always accompanied by less-than-perfect tape loops, which function as the duo’s rhythm section while Waterhouse and Cho clamp down on guitar and key improvisations, respectively. At first, the songs’ drowsy openings—specifically on the pair’s first long-player, “Puff”—don’t offer much hope of congealing. Given enough time, though, all the fuzzy, meandering key strokes coalesce into krauty grooves a number of bands reach for but can’t attain. Closing out Blues Control’s 2009 “Local Flavor” is a sixteen-minute investigation, beginning with an organ progression befitting Dracula descending a staircase, eventually surging toward a teutonic pulse. “Valley Tangents,” the disc readied in concert with Drag City, ranks as a departure for Blues Control. It’s not just a newfound fidelity separating the  disc from the band’s past, there’s a decidedly 8-bit bent to Cho’s keys, “Iron Pigs” and “Opium Den/Fade to Blue” being noticeable culprits. It’s funny to hear “Walking Robin”—the band somehow loses time with the accompaniment of programed drumming, a feat almost extraordinary enough to search out even if the rest of the album didn’t present anything of interest to listeners. It does, though. Just in a way folks might not expect from being familiar with Blues Control’s earlier efforts. Chandeliers open. (Dave Cantor)