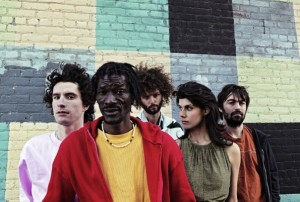 Celebrate Clark Street, a local street festival sponsored by the Rogers Park Business Alliance, may just be one of the best opportunities Chicagoans will have to see world music this summer. The diverse musical lineup, curated by David Chavez of Sound Culture Center for Global Arts, features more than twenty international music artists, both from abroad and from right here in Chicago. The festival also features ethnic foods, arts and crafts.

Among those traveling to Celebrate Clark Street from afar are several artists playing in Chicago for the first time. Sarazino, a truly global artist who has spent large portions of his life in Algeria and Ecuador, combines reggae, hip-hop and Latin and African beats with fresh energy. Also playing in Chicago for the first time are Janka Nabay, an expatriate of Sierra Leone, and his band the Bubu Gang, who bring to the stage a frenetic, electrifying and extremely danceable interpretation of the bubu music traditional to the Temne people of Sierra Leone. Fans of Amadou & Mariam should look forward to the Malian band SMOD, one of whose members is the son of that well-loved duo, and whose riff-heavy, almost light-rap sound is pleasantly reminiscent. Los Empresarios, with members from Puerto Rico and the United States and a style that combines salsa, ska, reggae, dub and house, promise an exciting live show.