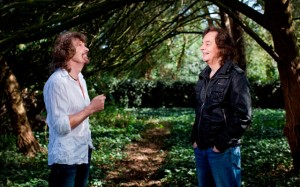 Considerably less radical than hard psych bands of the sixties, less conceptual than the Dead and not as bookish as the Beatles, the Zombies appreciated a bit of Stateside appreciation, despite relative uncaring at home in the UK. The few singles making it into the charts—everyone’s heard “Time of the Season”—weren’t enough to keep the band from breaking up by 1968 and issuing its farewell recording, “Odessey and Oracle.” Before bidding the music biz goodbye for a few decades, the Zombies, led by singer Colin Blunstone and keyboardist Rod Argent, distinguished themselves from Brit beat bands by smoothing out the bluesy edges of their compositions, which frequently featured reasonably complex keyboard lines and solos—at least when compared to the Pretty Things’ early thuggery. Recording a spate of singles and having those sides cobbled together on a few albums pushed the Zombies toward the conclusion of its first period, which resulted in the lilting psychedelia represented on “Odessey.” Much has been made of the group’s use of mellotron, substituting the electronic instrument for brass. But really what makes the album is Argent’s ability to arrange music for Blunstone—“A Rose for Emily” being melodically advanced in a way most would want to attribute to the Kinks. Hearing the disc, with all those vocal harmonies and range of moods contributed by Argent’s fluid keys, it’s hard to imagine how the band was able to avoid fame in its native country. The bassline opening “I Want Her, She Wants Me” should alone have drawn in the glassy-eyed hippies kicking around swingin’ London. Let’s hypothesize that those early career disappointments contribute to why the Zombies’ upcoming gig comes along with a pretty staggering price tag. At least they’re primed to work over the hits you love—just take a listen to “Recorded Live in Concert at Metropolis Studios, London,” released in June, for proof. (Dave Cantor)