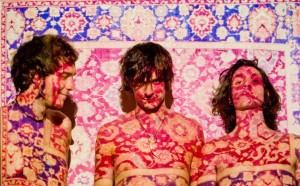 There’re so many bands massaging garage and psych tropes into an end product split into two songs, etched on wax and sold for five bucks a pop that there’s not too much reason to keep paying attention. Sure, Thee Oh Sees are going to continue spewing out records that contain at least one choice cut. But there’s still a distinct lack of genuine experimentation within the music. Psych, in its more garagey incarnations, isn’t meant to do much apart from function within a pop structure, obeying the same rules that music on the radio does. Italy’s Sultan Bathery and its four-song EP “Fireworx” on Slovenly Recordings doesn’t do much to break up the monotony, but “Mud” arrives with a bit of unique personality. Well, let’s chalk it up to these folks being Italians and having acts like Jennifer Gentle kicking around to properly inform their music making. Before “Mud” turns into a few churning chords toward the end of its two-minute runtime, the track’s introductory section seems like it could have been cribbed from either of JG’s Sub Pop albums, prior to Marco Fasolo’s fully embraced droney experimentalism. Whereas those better-known Europeans were able to conceive of spooky sing-alongs like “Twin Ghosts,” Sultan Bathery is still mucking around in the short and swift throes of simplicity. “Moonlight” could be a monotonous Ty Segall track—and one people ache for at shows. But Sultan Bathery hasn’t yet hit upon enough of a unique approach to writing and pasting songs together to warrant the dude-love that the Bay Area dynamo summons. Sultan Bathery’s ability to hook up with a pretty well-respected imprint and tour on this side of the Atlantic, though, points to how potent its music could become. The yelps opening the title track point that out pretty easily, too. (Dave Cantor)