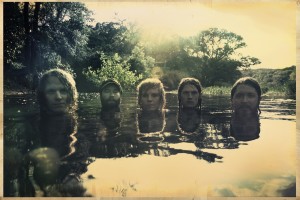 There’s no shortage of throwback bands copping to sixties pop and psych. Top-shelf purveyors are able to replicate and expand on all those wasted classics, inserting twenty-first-century ideas into what we’ve all become accustomed to. Austin’s the Black Angels almost weave their way into success. Naming anything “Mission District” is bound to be questioned by listeners—the song these Texans work up isn’t regrettable, but for some reason, singer Alex Maas takes a more melodic approach to droning out his lyrics than elsewhere. The approach doesn’t clash with the dumb thud of the ensemble’s psych stuff, but sets up a contrast better suited to the Doors than fourth-generation stoners. For all the times Roky Erickson gets referenced in connection with the Black Angels, there’s really very little tying the 13th Elevators’ frontman to the Angels, apart from previous joint touring. Of course, for a band betrothed to downer drugs and the mythical lineage affiliated with its hometown, the Black Angels’s sitar tunes serve its purpose well enough. “Deer-Ree-Shee” probably won’t be properly represented live—toting around a sitar in a van seems like a dicey proposition—but the consistent ability this troupe has to wind up its rock ‘n’ roll during songs’ five-minute run times hasn’t diminished over its three-record career. The bands last disc, 2010’s “Phosphene Dream,” cuts down on trancey repetition, reigning in songs to about the three-minute mark. Retaining its sixties sensibilities simply ties the Black Angels into Cynics’ territory, playing offbeat bands but with a noticeably more robust rhythm section. “Yellow Elevator” ranks as the album’s longest entry and embraces a bit of vocal harmony before the backwards guitar trip sidles in. Regardless of what any of “Phosphene”—or any other studio confection—sounds like, there’s a distinct chance the Black Angels will express a live set of tunes in dramatically different fashion than what’s been captured on tape. (Dave Cantor)