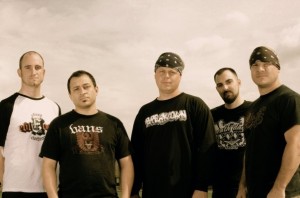 Back in the nineties when Derek Hess’ art featured prominently on any number of album covers and grunge seemed to need an angry nemesis, a buncha straight-edge types went and upped the musical ante. Displeased with most aspects of the culture surrounding punk and metal, some folks in Syracuse, New York, founded Earth Crisis to function as a mouthpiece for the animal-rights and righteous-living camps. Remember when fights broke out at shows because someone was drinking a beer? Yeah, it was some tough guy who liked Earth Crisis instigating all that. What’s interesting about the band and the movement Earth Crisis and Victory Records are linked to is that tolerance has been set aside in order to achieve an idealistic goal. It mirrors the social rights movement by disregarding passive resistance, embracing guerrilla tactics and having a go at equality. Well, that and fascism. Accompanied by dirgey metal riffs and gruff-throated vocals, Earth Crisis didn’t change American policy or even most American’s view on a living right and treating animals with a modicum of respect. It did churn out some nasty metal and make Victory a pile of punks’ money. The band’s hiatus in 2001, a few years into the Bush administration, shouldn’t be stunning—it also coincided with physical album sales pitching down. Earth Crisis’ return with 2009’s “To the Death” didn’t reveal much had changed—Karl Buechner still screams stuff like “Vegan to the death.” “Plague Bearers,” an instrumental suited to the Melvins understanding of aggressive music, displays the band’s finesse amid thudding simplicity, while sonically explaining nothing’s changed musically or politically. Even if this all ranks as theater to some, people engaged in political activities and those folks who seek to experience a purely emotive performance owe it to themselves to catch Earth Crisis before apathy takes hold and the ensemble calls it a day—again. (Dave Cantor)