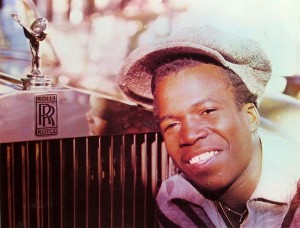 Beginning his singing career before most guys start shaving on a daily basis isn’t the most notable aspect of Barrington Levy’s time in music. By the time he was sixteen, the singer had released at least five albums—and that’s not including singles and one-off dub plates. Part of Levy’s early success was the result of working with producer Junjo Lawes, engineer Scientist and the backing group Roots Radics Band. But all these remarkable musicians in one room wouldn’t have mattered much if Levy’s voice weren’t one of the most unique in Jamaican music. Before Auto-Tune, Levy was able to modulate his voice in some inhuman way, displayed during all those “diddly-whoas” and “swings” he croons on tracks like “Here I Come.” Arriving during the dancehall period didn’t hurt matters either—the overly conscious lyrics of the previous era must have become grating, something like enduring a lecture on proper living for a decade. Levy’s lyrical focus wasn’t quite as base as most performers associated with the genre, but he was considerably more insightful than all the lover’s rock stuff coming out of the United Kingdom. “Under Mi Sensi,” one of Levy’s more recognizable works even before the Long Beach Dub Allstars versioned it with the singer’s blessing, is obviously about the pleasures of weed, something not too distant from songs coming out of the root’s era. Switching gears to discuss the Robin Hood syndrome and violence on “Murderer” left the singer as one of the most enduring latter-day performer’s from Jamaica’s classic period. His live sets haven’t changed over time, either. He’s just as likely to don a U-Roy styled hat and hit on your girlfriend today as he was thirty years back. (Dave Cantor)