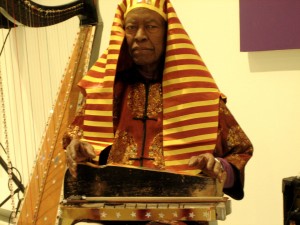 Hemming up Phil Cohran’s career into a simple linear narrative happens too frequently. His work, spanning the 1940s to the present, can be easily compared to jazz’s trajectory. But just because the trumpeter and tiny-instrument toter worked in big bands, then with Sun Ra and skirted the free jazz thing, doesn’t mean any other performer would have made the same decisions Cohran has. Arriving in Chicago by way of St. Louis after a childhood spent in the South, Cohran got hooked up with the Saturn native and recorded a few of the bandleader’s most intriguing Chicago dates—1967’s “Angels and Demons at Play” being of note. Cohran stuck around town after Sun Ra split, continuing to work on his own compositions. Hell, even the Art Ensemble of Chicago had to move to France in order to gain a sturdy following. The year following Sun Ra’s relocation, Cohran worked up a handful of songs that today represent the height of his accomplishments. “Armageddon,” “On the Beach,” his tribute to Malcolm X and “The Spanish Suite” each exhibit tenets of funk as related in a jazz-band setting and count future members of Earth, Wind & Fire. Drawing from ancient history and holding up African cultures as models to admire hasn’t gained Cohran followers outside of the jazz cognoscenti. But with each passing year and every performance, Cohran seems to develop further from bandleader to outer-space historian and cultural pillar. The multi-instrumentalist isn’t going to be the youngest guy on stage at the Hideout, but Cohran’s continued presence on the jazz scene means he hasn’t run out of ideas yet, and people haven’t stopped listening. (Dave Cantor)