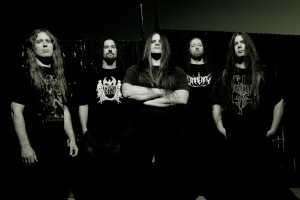 That people would be troubled enough by lyrics to restrict the speech of a cartoonish metal band is really what’s offensive. Cannibal Corpse has the dubious distinction of having its music banned in several countries. Of course, getting to appear in an Ace Ventura movie should mitigate any of those potential financial loses. That’s even cooler than Primus showing up in “Bill and Ted’s Bogus Journey.” With Chris Barnes helming the ensemble, Cannibal Corpse became one of the most visible metal acts in the country, a sort of more disturbed Slayer without any true commercial potential. But with all those album covers sporting zombies eating human flesh, Cannibal Corpse was bound to attract a following. Over its first pair of discs—1990’s “Eaten Back to Life” and the 1991 “Butchered at Birth”—the band subtly developed its approach to death metal, ushering in a more volatile mix of imagery and over-complicated time signature changes. But from the opening portion of “Shredded Humans,” metal enthusiasts should have noticed something unique. A bassy rumble opens the track, which might as well be a bong rip from any Cypress Hill album. That’s probably not what’s actually going on here, but kicking into a well-orchestrated introduction before Barnes growls through the verse set the tone for the frontman’s tenure with the band. By 1996, he was off to other pursuits, and “Vile” arrived sounding faster and more full of vitriol than earlier releases. George Fisher quickly differentiated himself from his predecessor, displaying a more imaginative approach to discussing heady topics like puncture wounds and cumming as a result of torture. It seems as if almost nothing’s changed for 2012’s “Torture”—the same themes persist. And Fisher’s still mining the lyrical depths of strangulation and demented pleasures. The formula’s worked for about twenty years. So, at least fans know what they’re getting. (Dave Cantor)