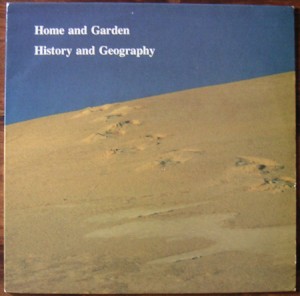 Tony Maimone’s one of the heaviest dudes in music you’ve never heard of—and that’s not a bass-player pun, either. Beginning his career as part of Pere Ubu’s dub-inspired rhythm section, Maimone’s gone on to record work by other ridiculously influential bassers like the Minutemen’s Mike Watt. But back in the day, while the Ubus were attempting to merge a sci-fi creepshow with music that copped punk’s energy before there was punk, he and drummer Scott Krauss anchored one of the most adventurous and confounding underground groups in the States. But working with Ubu-frontman David Thomas warranted some time off. So, the pair began gigging around as Home and Garden during the early eighties, releasing a handful of discs before the revolving line-up included a number of other performers, while Maimone set up his Brooklyn recording studio. During the band’s early phase, it issued the “History and Geography” album, ramping up some of the Ubu’s lesser new wave tendencies and including Jeff Morrison’s cool-toned vocals. It’s pretty easy to figure Ubu fans will be intrigued by the effort. “Bells of Ever and Never” gets so far beyond whatever counts as experimental rock that any analog key enthusiast should be able to sit through Morrison’s recitation. Raving-mad ska colors work like “Marco Polo: The Voyage” just as Jamaican rhythms impacted the Ubu’s low end. It doesn’t even come off as hackneyed. Home and Garden pulls off a tense performance, meaningfully proclaiming “I am stranger” with effortless abandon. Of course, all of that happened thirty years ago. With the inclusion of some younger players—guitarist and Exit Stencil honcho Ryan Weitzel—some changes may have occurred, but the same curious strain of experimentalism persists. The band’s Chicago appearance also marks a sort of reunion, as ex-Mekon Jon Langford, a gentleman who Maimone’s done time with on projects in the past, headlines the gig with his Skull Orchard troupe. (Dave Cantor)