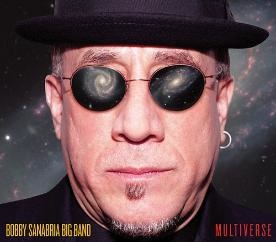 Master percussionist,  maestro and drummer Bobby Sanabria might come from a classic Latin jazz background (he played with both Dizzy Gillespie and Tito Puente and was a featured musician on the soundtrack for the 1992 film “Mambo Kings”), but that doesn’t stop him from innovating within the format. A clear example of this is “Multiverse,” which takes the music into unexpected directions starting from a very interesting take on Don Ellis’ “The French Connection,” which was the main theme for the Gene Hackman movie of the same name.

Here the tune is transported to a completely different direction, with distorted brass instruments and various sound effects. Halfway through the tune, its pause features a contemporary-jazz-leaning piano solo from Enrique Haneine, who takes the groove to a whole different musical direction. Wayne Shorter’s “Speak No Evil” is also taken in an Afro-Cuban direction and is the perfect vehicle for tenor saxophonist Peter Brainin, who leads the tune and also takes a dexterous solo halfway through. For those into standards, there is a gorgeous version of Harold Arlen’s “Over The Rainbow” with heartfelt vocals by Charenee Wade and great accompaniment by the ensemble.

“Multiverse” sounds fresh even after repeated hearings, and will please both the Latin jazz purist as well as novices, since the music swings—but not too hard that you won’t get it. (Ernest Barteldes)