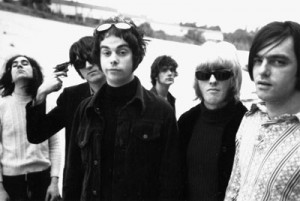 For the last seventeen years, Anton Newcombe’s been a pretty public asshole. Well, probably longer, but he wasn’t recording as the Brian Jonestown Massacre at that point. The cavalcade of unknown performers passing through the band’s ranks have attested to that fact and did so in a documentary, “Dig!,” detailing the band’s history. Kicking around for such a long time, though, has allowed Newcombe to fully assimilate his influences: mostly the Stones, Dylan and sundry sixties rock. But issuing more than ten long-players has granted the guitarist and singer a chance to broaden his taste. “Thank God for Mental Illness” sounds nothing like this year’s “Aufheben.” That 1996 album takes the more bucolic concerns of Jagger and Richards, infuses them with a California-birthed hedonism and winds up presaging the disbanded Libertines and its troubled frontman. Being just one of several albums Newcombe released that year means the effort couldn’t have ranked as an indisputable classic. Bomp! Records, a Los Angeles institution, still saw fit to issue the group’s work for another year, before BJM moved onto TVT for the cutout-bin ready “Strung Out in Heaven.” Titling work in such a fashion hints at the sort of chemical fracas kicking around Newcombe’s bloodstream, which could explain why there was a drop-off in releases from the troupe. Newcombe’s latest recording shouldn’t lead listeners to figure he’s turned down free drugs of late, but “Aufheben” comes off like some of the more sedate advances made by Amon Düül II. BJM retains its sixties rock leanings but embraces repetitive rhythms and some flute jams for “Illuminomi.” For longtime fans of Newcombe’s work, no one should claim surprise. His career’s been a series of well contrived imitations. And pulling in a new crop of favorites should enable the songwriter to continue issuing a record every few years for the next several decades. (Dave Cantor)