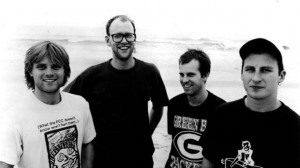 With the voice of a raspy pop star, Eric Bachmann led the North Carolinian Archers of Loaf for the better part of the nineties alternative rock plague. Getting lumped into a handful of well-meaning noiseniks like Pavement didn’t elevate the ensemble to the same vaunted territory as that better-known group. Archers weren’t ever as wild or focused on distorting rock’s language, but early on, Bachmann and company wrenched out some surprising sounds from a traditional rock setup. By the time 1998’s “White Trash Heroes” rolled around, though, it was pretty clear Archers had squealed all it needed to squeal. The group’s first disc and the Bob Weston-produced follow-up easily rank alongside anything being dug up and reissued from the era. Pushing out “Icky Mettle” in 1993 found the disc swamped in then-current indie material, with just enough pop sensibility to ingratiate the work to college radio djs. Yielding tracks like “Wrong,” on which Bachmann discusses the finer points of truth-speaking, the Archers were able to tread on enough traditional ground (read: sappy lyrics) while jacking up the gain up as far as possible. For its 1995 “Vee Vee,” the band sounds even better prepared to launch into its bursts of strangled guitar. Weston turned the session’s recorded artifact into a tinny assault—the band pursuing complete assimilation of its wilder inclinations with Bachmann’s writing functioning as scaffolding. “Underdogs of Nipomo” sports what sounds like an alternate tuning, but with the scuzzy overlaid guitar lines vying for dominance and Bachmann’s punky sneer, it’s difficult to do anything other than accept the discordance and wonder what’s next. Lyrically, the band’s all downer drudgery, but the decade of time off may have changed everyone’s perspective on life. We’ll find out at the Bottom Lounge. (Dave Cantor)