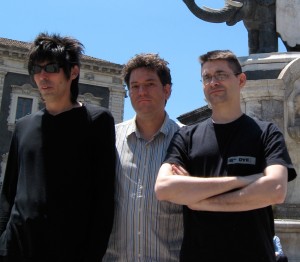 The only bad thing people say about Steve Albini is that he’s brash and opinionated. But hearing the music he’s played and recorded since the early eighties, that should have been assumed. What people don’t seem to take issue with is that everything from Rapeman to Big Black and song titles like “My Black Ass” aim at being controversial. Exerting that sort of effort just makes the attempts kinda lame. The song’s pretty good, though. After dispensing with drum machines, Albini, bassist Bob Weston and drummer Todd Trainer started working as Shellac during the early nineties, issuing a string of releases helping to define the latter-day Touch & Go sound. And the trio’s upcoming three-day stand at Lincoln Hall marks its twentieth anniversary. While being predictably wild over those two decades, the band’s cerebral approach to composing resulted in obtuse and overly gratifying rave-ups like “This is a Picture” from 1998’s “Terraform.” There’s almost no use trying to decipher Albini’s whisper—it’s buried deep in that swampy mix. His singing, which here would really be better suited to open mic poetry readings, isn’t meant to inspire listeners to envision angels, so much as work to uncover the history contributing to his cranky persona. It’s been just about five years since Shellac’s issued an album, “Excellent Italian Greyhound” opening with a weird bit of would-be studio chatter, turning into the song’s lyrical center piece: “Can you hear me now,” Albini asks no one in particular, again and again. The lack of recording since 2007 hasn’t kept the band from signing on as curator for the upcoming UK installment of All Tomorrow’s Parties. And while the troupe performing in front of a few thousand folks should be a spectacle of the highest degree, hometown hecklers could coax several memorable performances from Shellac over the weekened. A reunited Tar opens Sunday’s performance. (Dave Cantor)