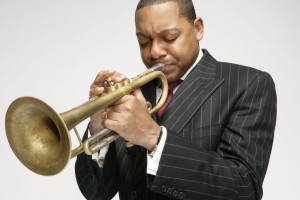 In the past few years, trumpeter and Jazz at Lincoln Center bandleader Wynton Marsalis has recorded three live albums of blues and soul music (two with Willie Nelson, one with Eric Clapton) in addition to touring with both his quintet and the JALC orchestra. He has also joined CBS News as a music correspondent, doing entertaining reports on Paul Simon, blues music and the legacy of Dr. Martin Luther King, Jr.

His Chicago appearance with the quintet (which is rounded out by Walter Blanding on tenor sax, Dan Nimmer on piano, Carlos Henriquez on bass and Ali Jackson on drums) comes after a long European jaunt that included stops in France, Germany and England.

As of this writing, neither JALC nor Wynton Marsalis have released any detailed information about the program for the evening, but from the videos we’ve seen from the tour so far, it’s a decent mix of blues, New Orleans, straight-ahead and modern jazz—all styles that Marsalis has tackled throughout his career. (Ernest Barteldes)