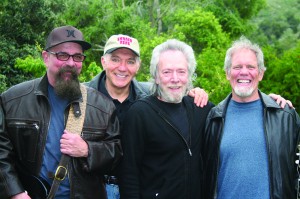 Ripping off the blues for less than half of the sixties, the original Canned Heat lineup still racked up a few indispensable cuts over four albums. Led by two stoned record geeks working under the names The Owl and The Bear, the Heat were able to take an American form and goose it, resulting in something well beyond what the Stones or even Creedence could have conceived of. A 1967 self-titled effort and the following “Boogie with…” don’t get beyond contrivances, although “On the Road Again” spins with a hyped-up electric vibration as suited for this reimagined blues as it would be for any raga-rock investigation. The song should be immediately familiar, and The Bear’s loony-bin falsetto points to the impeding “Goin’ Up the Country.” While that eventual hit seems to define the band all these years later, its greatest accomplishment is the three sides of Love Generation jamming that followed on the 1968 “Living the Blues.” “Parthenogenesis,” a twenty-minute headless ramble through the development of blues is best suited for altered states, but “Refried Boogie” delivers in a way that only Paul Butterfield’s “East-West” and some live Allman Brothers can. Surely, raving boogie overlaid with Technicolor guitar solos won’t appeal to everyone. But in the same way James Brown figures into the history of minimal music, a troupe of wasted blues aficionados taking a walk around four different chords in as many different ways as possible deserves due deference. All these years later, drummer Adolfo “Fito” de la Parra runs the show—everyone else was laid six-feet under the clay a ways back. But white-haired dudes should know those blues scales better with a few extra decades worth of  practice. (Dave Cantor)