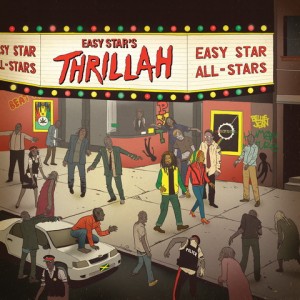 Since their first Pink Floyd tribute “The Dub Side of the Moon” was launched in 2003, The Easy Star All-Stars have regularly put out other albums honoring Radiohead ( 2006’s “Radiodread”) and The Beatles (2009’s “Easy Star’s Lonely Hearts Dub Band”) in addition to discs with their own original material.

This time around, they have come together to take on Michael Jackson’s “Thriller,” one of the biggest-selling pop albums of all time in the United States. It is not an easy task, considering how ingrained many of the songs are in fans’ memories—it is little wonder that so few artists have recorded covers of tunes like “Billie Jean” and “Thriller” over the years.

On tunes that lend themselves well to reggae, the transition was seamless. “Wanna Be Starting Something” is played very close to the original save for the guitars and percussion. “The Girl Is Mine” (originally recorded as a duet with Paul McCartney) already had a bit of a Caribbean feel, so that one also came out great. “Thriller” is performed in a much slower tempo, which gives it even a darker edge, especially when the final narration comes in.  “Billie Jean” sounds completely different, as the arrangement focuses mostly on guest vocalist Luciano (a regular on Easy Star’s tribute albums), percussion and sound effects.

One of the best is “Human Nature,” which respects Jackson’s original feel while swiping some of Cyndi Lauper’s “True Colors” in the process.  Also notable is “P.Y.T. (Pretty Young Thing),” which goes into a completely different musical direction while still sounding recognizable. Kudos goes to the engineers for allowing the twenty-piece band to be audible while still sounding too packed, and to the vocalists for holding on to their own styles. (Ernest Barteldes)