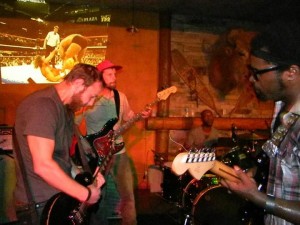 Who woulda guessed that knife hits would eventually lead to dance hits? Puffy Areolas’ musical trajectory hasn’t moved in a calculable curve so much as it darts erratically from sub-basement loner punk to euphoric tape-deck manipulation and on to primal R&B. After the all-points Ohio band led by herb-scented Damon Sturdivant moved on from collectable tape and vinyl releases to the Siltbreeze-issued “1981,” it would have been easy to write the whole endeavor off, guessing that song after song would simply comprise a repetitive two-note screed. But the songs are charming and spacious enough to encompass everything from  psych and punk’s back-catalog. “1982: Dishonorable Discharge,” which hopefully was titled with double entendre in mind, still counts as an album of songs about doing drugs—it’s just set alongside some weird romantic narrative on “Take My Place.” What’s most surprising, though, are the three tracks closing out Puffy’s latest disc. “By the Hand” opens with some walking bass and quickly moves into a garish garage-cum-dance track, suited to a “Nuggets” compilation (if there was one recorded during the filming of Tod Browning’s “Freaks”). The pair of notes that make up “All Day” isn’t revelatory, but the concerted effort at tuneful singing is a wholly new idea for this band on wax. The unintelligible vocal squawks that make “1981” so interesting have been replaced by Sturdivant grafting some Motown crooning atop the awful squalor of his music. The band still stretches out, descending to whatever personal hell’s prompted all this music on the seven-minute “$200 (Dishonorable Discharge).” But what initially brought freaks in to Puffy’s fold is still well represented on that closer. The detritus surrounding it doesn’t make you wanna sit in the corner and polish off a bottle of Old Grand-Dad alone. Running, a debonair troupe of locals, opens with its low-IQ take on auld tyme hardcore. (Dave Cantor)