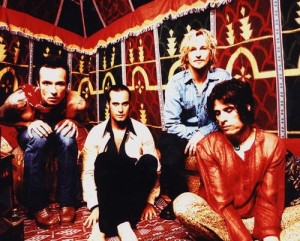 It’s a cliché—but a funny one—that every singer who performed in a nineties rock band sounded roughly the same. Sure, there’re more than a few songs Eddie Vedder, Kurt Cobain and Scott Weiland could trade off on and no one would know the difference. But one of those guys is dead, one plays the ukulele and the other is somehow just still alive. Weiland’s Stone Temple Pilots might be the least versatile of those groups represented in the aforementioned triumvirate—and no, Soundgarden hasn’t been given short shrift, since they were always a cock-rock band. But STP’s handful of hits still hold on to a bit of gut-level authenticity, obscenely absent from rock ‘n’ roll over the last decade. 1992’s “Core” comprises more than a bit of filler, angling at moving beyond hard rock flailing into some sort of music that both tells a story and issues emotion. STP’s “Creep” isn’t even the best song with that name, but the slower pacing serves Weiland, as his voice takes on a softer, but still strained, approach to leading a song through the paces. Rhyming mouse with just about anything is a bummer, but the song’s twenty-year-old charm pushes through a narco-haze. Following up its first success, the 1994 “Purple” finds the band using the same sort of template-jerky guitar, shaking off its most metallic inclinations as Weiland further pushes himself to, you know, actually sing. “Vasoline” was a hit—and it may have been better if one of those other flannel-clad stalwarts sang it. STP kept working through the mid-decade decline of its mini-genre, making a final stand in 2001, before a nine-year hiatus. Returning with a self-titled work in 2010 that occasionally sounded like a broken Black Crowes—“Hickory Dichotomy” taking twang to a place it wasn’t meant to go—didn’t announce a renaissance. It just reminded folks with a radio that Weiland had somehow avoided an overdose and meant Velvet Revolver was taking a much-needed break. STP’s trek through town might count as classic rock to an entire generation, and the show’s affixed price tag insinuates that. (Dave Cantor)