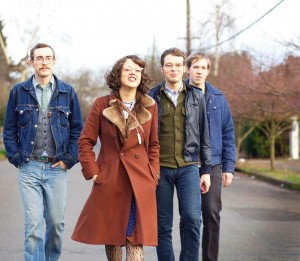 City dwellers have been engaged by a stream of rural players dating back to Uncle Dave Macon and the Carter Family. Sallie Ford and her troupe call Portland home but have roots reaching back to the Smokies. Taking trails outta their adopted Northwest enclave, the band’s appropriation of country, swing and pop has garnered enough attention to catalyze the re-release of its 2011 “Dirty Radio.” The disc’s name is regularly explained over the course of thirteen tracks, beginning with “I Swear” and moving through “Write Me a Letter,” when Ford throws out names like Jets to Brazil, Sunny Day Real Estate and e.e. cummings. It’s not a revelatory take on the music industry, but hearing Ford sing lines like, “I want to suck you up in a straw/Even if it was against the law,” is as filthy as anything etched into vinyl. Her voice sounds like it was beamed out of some East Tennessee radio station during the late fifties, but somehow we’re just now picking up the signal. The Sound Outside, a clearly competent trio, ably backs Ford with rumbling rhythms. And when it’s time to jam a guitar solo in there, no rockabilly enthusiast is gonna be troubled. Arranging the entire affair still seems like something of a hassle, though. With Ford’s barroom-ready voice, the backing ensemble has to steer clear of anything that approaches flashy during verses. With room to stretch out between all that gruff-throated crooning, the Sound Outside hasn’t quite perfected moving between sections of its compositions. Part of what’s at issue in Ford’s mélange of genres and time is that no one’s decided if the whole thing’s meant to be a throw-back affair or something pushing at the edges of the future. It winds up being a bit of both, detracting from overall coherence. Ford’s voice, though, makes up for any pratfall the band may encounter. (Dave Cantor)