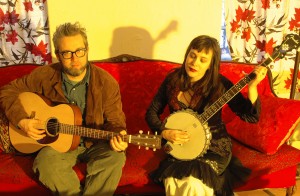 Wherever the Handsome Family are, it seems to be raining. Or something unfortunate’s happening. Digging around in Americana’s attic, folks usually notice all the odd occurrence—fights, unfaithful spouses, murders, inexplicable religious events—but Brett and Rennie Sparks seem to have taken it all in stride and worked to mold a precise update of decades-old music. Beginning with “Odessa” in 1995, the Sparkses straddled acoustic music and blownout amps with their combination of new and old. “Giant Ant” took on a bit of both, while relating a story about a monster with legs as big as smokestacks. It’s a fifties sci-fi extravaganza, and that’s really the era of music the band works with most adroitly. Coming to that very same conclusion, the Handsome Family would jettison its harsher moments, redoubling the charmed duets and spooky songwriting. The Handsome Family’s 1996 follow-up took on a lighter tone, but remained weird amid a new(er) weird America. For some reason, even with tours supporting the likes of Wilco, the Handsome Family didn’t overwhelm the NPR set and ditched Chicago for the desert. Subsequent recordings find the Fam inching closer to a Clinch Mountain sound, doused with just enough instrumentation to retain rock and subtle gospel influences. “My Friend” gets the spirit, reveling in warm organ, allowing Brett to show off his vocal range. He winds up sounding like a guy getting a shot on the Johnny Cash Show a few decades back. And to be sure, the ole-time warm-and-fuzzy stuff would have gone over with that Bible Belt crowd. All that’s missing are a few other family members to help perform. Of course, the remainder of 2009’s “Honey Moon” isn’t lacking in family sing-alongs. And with this upcoming return trip slated for their once-adopted hometown, the Handsome Family’s performance should hopefully be something like sitting in front of an open fireplace with friends—a few hundred of ’em. (Dave Cantor)