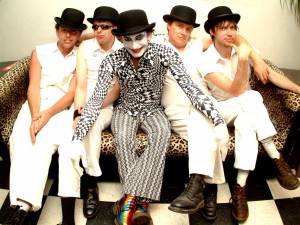 Riot Fest limps on for another year, turning its focus to expanding in other cities, booking bands like Rise Against or the Offspring to fill out time between Iggy and his geriatric Stooges. Even Andrew WK, who has apparently insinuated himself into the NYC underground by sponsoring a well-thought-of venue, is slated to make an appearance. And for all the tolerance one might muster for third-wave ska, Less Than Jake wasn’t ever the pinnacle of its genre. So at least Chicago’s Deals Gone Bad are slated to appear, balancing out the ironic Pez frenzy. When a Chiodos reunion’s touted as a must-see component of any festival, it should raise a few eyebrows. But if you thought Coheed and Cambria were a dusty visage of bygone almost-pop-heroes, they’re back. And for whatever reason, Elvis Costello and the band he’s put together are set to appear—hopefully the former computer programmer gets into some singer-songwriter territory and pisses off the assembled Japanther fans. Slapstick’s going to make an appearance, as well. Slapshot apparently couldn’t be booked because that would be a bit too interesting. Instead, Choke’s ensemble performs alongside Dropkick Murphys, which will hopefully be limping off into our collective memories soon. Locking up Jesus and Mary Chain to perform is certain to bring in fans who would have otherwise avoided such a punky festival. And Built to Spill should pique the interest of Chicago’s tiny-spectacled spate of graphic designers. What the hell’s A Day to Remember and why should anyone care? Who knows, but maybe the Adicts’ll play “Mary Whitehouse,” since that should pack the pop necessities of all in attendance into two minutes and be performed by a guy who looks like he should be riding a giant unicycle down the street. (Dave Cantor)