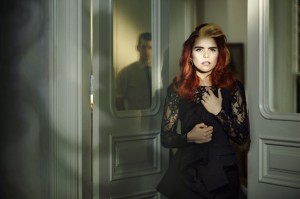 On her debut US release “Fall to Grace” (Epic), British-born singer/actress/songwriter Paloma Faith brings an eclectic mix of songs that show influence from Amy Winehouse and Duffy mixed with her own personality. A handful of songs are clearly meant for the dance floor, such as the neosoul-inspired “Let Me Down Easy” and especially the retro-sounding “Blood Sweat and Tears.”

The best moments on the album are the more intimate ones. For instance, “30 Minute Love Affair” describes a one-night stand without sounding cheap, while “Just Be” is a beautiful piano-based ballad about the realization that long-lasting love is not just about blossoms and laughter but also about the sad moments: “Let’s let go together/let us unfold one another/and watch all the little things that once drew me to you/eventually get on my nerves,” she sings with all honesty.

“Fall to Grace” mixes various styles, and a few backfire. “Agony” translates the title well with its lack of clear musical direction, and the same can be said about the “Picking Up the Pieces,” the disc’s opening track. But we might be listening to a diamond in the rough here, and the album holds well after repeated hearings. Paloma Faith is worth checking out on her first major promotional tour. (Ernest Barteldes)