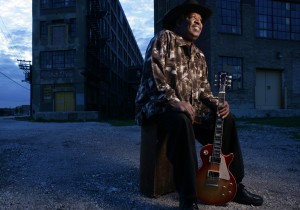 Driving up Interstate 55, it’d be easy to guess that there’s not too much in Mississippi. When hitting Jackson, the state’s capital, the tallest building seems to be a hotel—even the state building’s hiding out somewhere. What Mississippi does offer, apart from what appears to be a seamless wall of foliage until arriving at the Tennessee border where Memphis sprawls out in its industrial glory, is a hugely important part of the country’s music history. Magic Slim followed a path out of the South and found his way to Chicago in the same way innumerable other blues players have over time. His initial arrival in the industrial North wasn’t met with overwhelming approval, so after a stint with Magic Sam—the younger player’s namesake and mentor—he headed back home. Of course, that was over half a century back, so the guitarist’s second trip to Chicago must have gone a bit better. Accompanied by his brother, a bass player, Magic Slim staked out territory in electric blues land and began issuing recordings under his own name by the 1970s. Distinguishing his work from peers is sometimes difficult, although Magic Slim made sure not to emulate his mentor’s style, even if that’d be an almost impossible feat. On the 1978 “Highway Is My Home” Magic Slim goes in on Elmore James’ “The Sky is Crying,” taking the blues standard and turning it away from its roots in slide guitar, replacing moaning dirges with a flurry of arpeggios. It’s unremarkable that Magic Slim plumbs the blues’ songbook for inspiration, but the abundance of songs he can summon based upon setting and audience should ensure enjoyable live sets. He continues to release new work—“Bad Boy” being his latest. And while there aren’t set to be any musical revelations, Magic Slim continues to be a player connecting the once-nascent Chicago blues scene back to the country. Frank Bang & the Secret Stash open. (Dave Cantor)