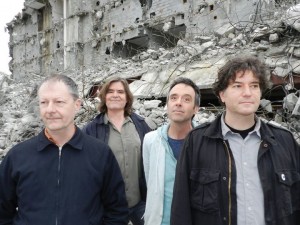 It’s easy to be cynical about the reason bands take a second run at performing. And that may well have been the proper attitude to take over the first few years Mission of Burma cropped up, after just being a looming specter in underground music for the better part of two decades. But the consistency and regularity with which the troupe’s been issuing music since 2004’s “Onoffon” trumps most folks on their first go-round. Of course, the groundwork for the succession of albums was well established by 1983, when Burma split up. With the summer release of “Unsound,” which again includes Chicago’s Bob Weston fiddling with tape and working behind the boards, Burma turns in another disc that should have pleased decades-old fans. But there’s a significant low-end deficiency—Clint Conley still holds it down, but the way the disc’s been mixed, it leaves a bit of extra sonic space where his bass could have punched it up a bit. 2009’s “The Sound the Speed the Light” sported relatively soft moments like “Blunder,” but even that song turned over and bellowed bassy after it got going. The critique’s made all the more amusing by “This is Hi-Fi” being an entry on the band’s latest recording. “Second Television” gets all melodic as Roger Miller takes one of the most affective vocal stances on any of his recordings. Burma hasn’t taken a new approach to its music, just evolved, slightly. Even the sturdiest condemnation of any one aspect on Burma’s latest offerings needs to be shrugged off. Surpassing the output of its initial phase, the band’s returned to revel in clubs with its offspring. (Dave Cantor)