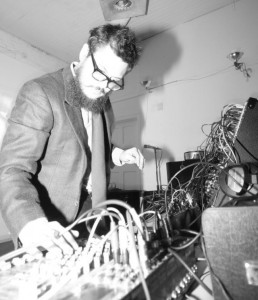 It’s almost impossible to properly comment on a music so mercurial that its performer can spread recordings over sundry tapes, records and digital pursuits without having followed a single path to its conclusion. M. Geddes Gengras, a multi-instrumentalist and electronics whiz from Los Angeles, is best understood through his relationship with the Not Not Fun crew and Sun Araw’s Cameron Stallones. That latter figure and Gengras recently headed to Jamaica and recorded alongside a roots group, famous for its work a few decades back. It’s not the resultant music that should help define Gengras—although it was as engaging a clutch of tracks as any to be issued during the past year—but the spirit of invention that went into the project. Toying with synthesizers and whatever vintage Moog is sitting around only has a finite shelf-life. Gengras is able to coax emotive swooning sounds from his electronic companions, pushing past whatever the instrument’s pioneers could have intended. At once academic and fluid, works like “Splashing into Mine” evoke nature while thoughtfully bounding through cerebral music not always suited for public performance. It’s that sort of multifarious tension enabling Gengras and his work to float above the teeming mass of knob-twiddlers traversing clubs these days. At his best, Gengras can produce music that sounds suited to headphones, or he can almost hint at live instrumentation, as on “Vepar” from “The Magic Seals of the Seven Angels.” There’s no one stance this producer’s settled into. And hopefully that provides for the flurry of releases to continue. Also performing are Laurel Halo—a woman able to summon the gravitas of an ensemble with bits of electronics, some keys and her voice—and Mi Ami’s Daniel Martin-McCormick performing as Ital. (Dave Cantor)