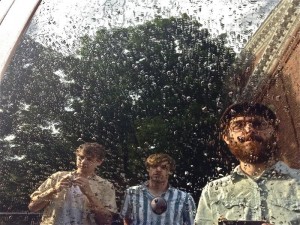 Listening to the Brooklyn-based ensemble Woods, which is equally fascinated by harmony and sprawling improvisation, develop over the last six years has been a sometimes confusing endeavor. For folks reintroduced to the band since it dislodged its punkier inclinations, going back and taking in tracks like “God Hates the Faithless,” from its earliest long-player, is gonna be startling. The effort ranks as the group’s only foray into gutbucket hollering. And while any ensemble worth its weight in merch needs to be able to find an avenue to refine its sound, the developments don’t always need to be set to tape and hawked in a capitalist frenzy. 2011’s “Sun and Shade”—apart from the seven-minute Velvets-styled jam “Out of the Eye”—could have been left in pieces on someone’s hard drive. Getting back to sappy sing-alongs suits Woods well enough and that’s what the new “Bend Beyond” deals in. The absence of extended instrumentals is a downer, but to patch that hole, the band turns in a clutch of tunes with as many memorable passages as its collective past. “Cali in a Cup,” the album’s first single, could have been pulled from any SoCal locale during the early seventies. Jeremy Earl’s falsetto is Woods’ centerpiece in perpetuity, but as years have worn on, there haven’t been a great number of songs with just his voice and a guitar out front. “It Ain’t Easy” does so to good effect, before “Cascade” rumbles through a spaced-out surf instrumental, low-end bucking against the squealing guitar. Cutting the duration of songs and working in each schizoid style the band’s toyed with over its lifetime makes “Bend Beyond” the most representative of Wood’s capabilities, but means that whatever’s next has to be as remarkable as this. Purling Hiss and an augmented Plastic Crimewave ensemble open. (Dave Cantor)